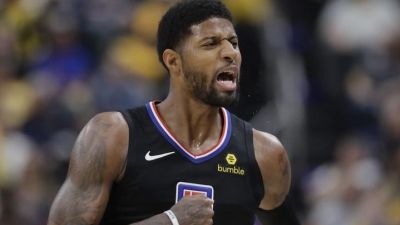 Paul George was special on the court last night, but ridiculous in his postgame comments.

Paul George has always been a brand first, and he represents that brand with occasionally excellent basketball but relentless self-importance and clumsiness in comments to the media.

George’s on court performance was outstanding last night for the Clippers in their 110-99 win over the Pacers.  His 36 points, nine rebounds, and five assists spoke for themselves, but George held a different kind of court after the game.  The results in that court were as awkward as he is graceful on the other.

“You know, someday I’ll do a tell-all and tell the leading events of how I left Indiana.  And I promise you, I’m not the one to boo … I’m not gonna share the teaser,” George said.  “I like being the villain. I’m here two nights out of the year. The people they should boo is here a lot longer than I am.”

When asked about team president Kevin Pritchard’s remark that learning on George’s desire to be traded was a ‘gut punch’, George said, “You’re getting close to trying to get this story out, aren’t you?” George asked. “I’m not going to bad-mouth KP. That’s just Kevin’s side of the story.”

That’s typical Paul George.  Yammer and hope.  His comments have always been bereft of meaning – an odd dance around an idea based in partial truth, but never bluntly stated.  Last night’s defense of the handling of his request for a trade was especially silly and empty, even by George’s standards.

When he was with the Pacers, George was always cooperative in giving time to the media but incapable – or opposed – to sharing insight.  It was the same last night.  He says he should not be booed – that the jeers from Pacers fans should be directed elsewhere.  The reasons?  None that he would specifically share.  Just a vague swipe at the front office.

George threatened a tell-all.  The problem is that the few fans who might be interested in George’s unvarnished truth already know the story: George wanted out, and the Pacers accommodated – receiving two all-stars in exchange.  George went to Oklahoma City, where he demanded another trade after pledging loyalty similar to his public promise to Pacers fans that was issued simultaneous to his request for a trade.

I wonder if he’ll also threaten a tell-all of how he asked to be traded from the Thunder.

It appears to be more important to George that he is being booed at Bankers Life Fieldhouse than it is to those who did the booing.  Given a choice, as you see in the Twitter poll below, the vast majority of Pacers fans prefer the return received for George than George himself.

#Pacers fans – who would you rather have on the team?

That’s nothing new for George.  He’s always seen himself as being more important and popular than he actually is.  As I write this, the poll shows 11 times more Pacers fans prefer Victor Oladipo and Domas Sabonis over George.

George has always been about branding.  Nothing wrong with that.  Branding equals money, and shoe money can help George and his family live a very comfortable life for generations.  What George has never been, despite his comment last night, is a villain – even in the cities he spurned by demanding a trade.

To become a sports villain, athletes need to win – they need to be loved and hated in equal measure.  So far, George hasn’t done that.  Despite what he thinks, George is neither loved nor hated among NBA fans.  He’s a guy.  Hell of a player, but a guy.

As a former Pacer, George is remembered for his lie rather than his play.  That doesn’t make him a villain.  It makes him a liar.

Maybe if George’s Pacers had earned a spot in the NBA Finals, fans would care more.  If the Thunder won a playoff series, Pacers fans would wonder what might have been.  Maybe if the Clippers win this season, Pacers fans will finally covet what George contributes.

But they will likely be more upset with Larry Bird for dealing Kawhi Leonard to the Spurs.  Even in retirement at the age of 63 and one of the best loved icons in Indiana basketball history, Bird dwarfs George as a villain.