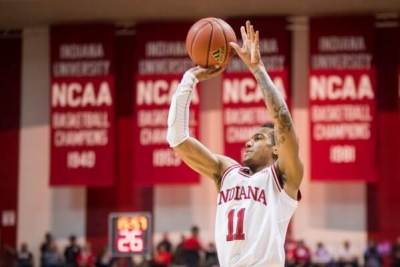 Devonte Green is a talented shooter, but there is more to basketball than shooting.

Devonte Green is the Indiana Basketball player fans love to love and hate – sometimes during the same game.

IU likely doesn’t beat Florida State without Green creating offense when there was none otherwise.  His 30 points on 10-15 shooting (5-7 from beyond the arc) were crucial in the Hoosiers’ pasting of the Seminoles.  No one cared much about Green’s four turnovers during that game because he shot it so well.

The opposite was true in the loss against Arkansas.  Green was 5-16 (4-12 on threes), so the three turnovers stood out like Romeo Langford’s sore thumb.

Turnovers are obvious.  The behind the back passes at the feet of bigs on the block ruin possessions, but there has also been a play in each of Indiana’s past two games that didn’t show up in the boxscore but are indicative of Green’s poor decisions leading to negative plays.

Up 11 with 4:06 left in the first half of the win that almost wasn’t against Notre Dame in the Crossroads Classic, Green heaved up a long (and ill-conceived) three from the left wing with 21-seconds left on the shot clock.  It came off the rim in Green’s direction.  Instead of getting back on defense, Green took a step toward the ball but lost the rebound to Notre Dame’s Prentiss Hubb who passed ahead to TJ Gibbs for a transition layup.

If Green retreats on defense, the Irish likely have to set up their half-court offense, which was mostly inert to that point in the game.  Instead the lead shrunk to single digits.  Games are won and lost on plays like that.  If Armaan Franklin misses his late-game three-pointer, Green’s poor decisions during that possession would have been correctly blamed in part for the loss.

Ahead by two against Arkansas near the five-minute mark of the second half, Franklin drove toward the bucket from the left wing.  Trapped on the baseline, Franklin sought relief by passing to the wing he had just vacated.  Green was supposed to be there.  He wasn’t, so the ball bounced out of bounds.  The turnover belongs to Franklin, who should pass to people instead of spots, but the correct basketball play was not made by Green.  On the other end, Isaiah Joe made a basket to tie the score.

That play was not solely responsible for Indiana’s loss, but like the attempted offensive board against Notre Dame, it represents a lack of adherence to basic basketball principles that will turn wins into losses.

A senior like Green should understand basketball better than the typical freshman.  No one is perfect, but Green’s mental errors continue to cost Indiana at an alarming rate.  Coach Archie Miller’s continued allowance for Green’s mistakes make it more and more difficult for Indiana to function consistently as a unit.

Making 23-foot shots is a great skill, and Green is one of the few Hoosiers who can do it well.  But poor fundamental basketball causes wasted offensive opportunities just as missed shots do.  Worse, Green being allowed to continue to make those mental errors shows Miller is either ignorant of them (which is not the case) or not concerned enough to bring the right combination of consequences to correct the behavior.

Indiana is going to win and lose games because of Green, which is exactly the same spot the Hoosiers were in with players like Troy Williams, Jeremy Hollowell and James Blackmon.  Until the tolerance for bad basketball changes, Indiana will continue to be mired in mediocrity.