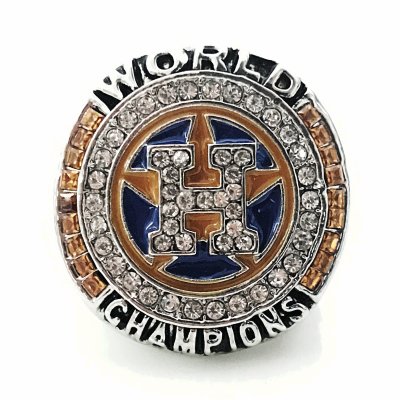 This is what baseball is about, and the Houston Astros were willing to cheat to get this bling.

MLB commissioner Rob Manfred wants to stop cheating, so he took a swing at getting tough.  Weak ground ball the other way.

The first rule of correcting behavior is to make the cost of the punishment outweigh the value of the reward.  In this regard, we don’t change a hell of a lot from the time we are children until we die.  Given a moderate level of sanity, when the consequences are serious, we make better choices.  If the consequences are manageable, we plow ahead with questionable behavior.  With great rewards and trivial consequences, we sprint to the rewards.

Here are the rewards of stealing signs with electronics:

Here are the consequences:

Alex Cora, the Astros bench coach in 2017 and current Red Sox manager, is said to have been the architect of the cheating.  It’s expected Manfred will punish him severely.  It bears mention the Red Sox won the 2018 World Series, Cora’s first as skipper.  If Cora is found to have cheated his way into a championship two consecutive years, Manfred will have an opportunity to go all Kenesaw Mountain Landis on him.

Here are the pragmatic effects of the consequences –

There is paper cut level pain associated with these sanctions.  The championship, current roster and franchise popularity remain in place.  The tangible cost?  $5-million.

No billionaire on the planet would refuse that deal.

When baseball seriously attacked the problem of gambling among players a century ago, commissioner Landis went scorched earth.  The 1919 Chicago Black Sox allegedly threw the World Series in exchange for cash promised by gamblers.  Baseball exiled the eight offenders forever, and they remain on the ineligible list almost 45 years after the death of Swede Risburg – the last surviving member of the notorious eight Black Sox.

Pete Rose was arrogant/stupid enough to venture into gambling despite the fallout from the previous scandal.  He received the same sentence – lifetime ban.  Since then – not a sniff of a problem.

Get it?  Big hammer = big compliance.

If Manfred wanted to strongly discourage a return to electronic skullduggery, he would have been more serious with the administration of career capital punishment.  Maybe he’ll take that option with Cora.

If not, he has given the 29 other franchises the intelligence necessary for a cost benefits  analysis as they decide what line they are willing to cross in exchange for wins, profits and a championship.