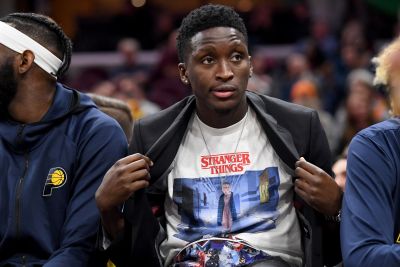 Victor Oladipo wearing tee-shirts instead of playing has made them even more fun to watch.

If I fall in love with a Pacers team, it usually takes a long time – a year or more with the same core group.  I waived the waiting period this year.

Wins and losses rarely determine which teams I love, but these Pacers have been quite successful with.a 28-15 record despite Victor Oladipo not playing a minute thus far.  He’s likely to be back January 29th for the home game against the Bulls, but regardless of his availability, I love the way these guys play.

They are appointment TV for me – even late games like tonight’s contest at Utah.

10 – They never whined about Oladipo’s absence.  The Pacers balled their way through adversity.  No Vic.  No problem.

9 – Goga.  I love talking to the guy as much as I enjoy watching him.  He’s a modest 20-year-old who spent time on the streets of war-torn Georgia (the country – not the state south of Tennessee), and is sharpening his game so that when his number is called, he is good to go.  Goga is energetic, funny, runs the floor well, has great hands and a knack for the game.  Did I mention he is going to be an all-star?  It’s fun to know things before others.

8 – Malcolm Brogdon’s combination of intellect and competitiveness.  Really smart people tend to acknowledge the absurdity of throwing a leather ball through a hoop as a vocation that sets up a family with wealth beyond the dreams of avarice.  Brogdon is certainly smart enough to accept the silliness of the NBA, but competitive enough to care deeply about wins and losses.

7 – They don’t need Oladipo’s “return” to compete.  I have a problem with the entire notion of there being an Oladipo “return.”  Of course, he will be back, but calling it a “return” heightens the importance of the moment beyond what it really is.  The Pacers are 28-15 without Vic.  Nothing against him, but they would be OK with Oladipo wearing funny tee-shirts for the rest of the season.  With Vic they will be better, but it won’t cause a 180-degree pivot to high-quality basketball.  The Pacers are already there.

6 – Pacers compete every night for 48 minutes.  They aren’t great every minute, but over the course of 48 minutes, the Pacers show they are highly invested in the result.  In 43 games, the Pacers have taken a double-digit ass-whooping six times.  This group will not fold its tent.

5 – Second unit knows its role.  So many teams have a bench filled with starter wannabes.  The Pacers have guys who understand that 15 minutes of playing your ass off can make the difference.  Look at Doug McDermott last night – 21 minutes, 10 shots, 24 points and zero complaints. I’m sure Aaron Holiday would like to be a starting NBA point guard one day, but he plays like he knows this team has a chance to be special with him as a backup.

4 – No load management.  Maybe injuries have mitigated the need for Brogdon and Domas Sabonis to sit periodically, but there have been zero instances of load management as practiced by players and teams because 82 games is too many for their bodies to withstand.  If fans are going to pay retail for tickets, the entire cast of the show should be on stage.  That happens with the Pacers.

3 – Nate McMillan enjoys coaching this group.  There have been players and subsets of Pacers teams that McMillan clearly was not thrilled to lead.  As this roster came together over the past three years, he’s smiling more and more.  McMillan is clearly digging the challenge of getting the most out of a roster determined to bring their best in every workout and game.

2 – They talk the talk – convincingly.  I keep trying to find someone on the roster who will say something other than “I’m lucky to be a part of a team this unique.”  I follow up by asking if this is really different.  The response is always the same: the player to look at me like I’m nuts and says, “Yeah, this doesn’t happen in the NBA.”

1 – They share the ball.  Very few things annoy me more than selfish basketball, and the Pacers seem not to have a single guy who is more about him getting his than them getting theirs.  Last night’s game against the Nuggets is a great example.  McDermott scored 24, with 18 coming in the fourth quarter when he got hotter than hell.  Sabonis, T.J. Warren and Brogdon had 22 points each.  When is the last time you saw four guys on the same team score between 22-24 points in the same game?

I love this Pacers team enough that I would even forgive a loss tonight in Utah.  But I hope I don’t need to.