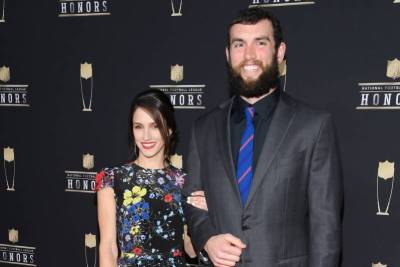 When it was only Andrew Luck’s decision to play football or not, he could afford to take chances. As Nicole’s husband, the metrics changed.

A lot of time and energy has been spent dissecting Colts quarterback Andrew Luck’s decision to retire from the NFL.

Why did he pull the plug on a career 15 days before the beginning of the 2019 regular season?  His team was seen as a Super Bowl contender before he pulled the plug.  The Colts had a top flight offensive line in front of him, a coach that knew how to utilize his gifts, and weapons to utilize.  Everything had come together for the top pick of the 2012 NFL Draft until he shocked us with his seemingly sudden retirement

Not surprisingly, Luck has been tight-lipped about his decision and post-NFL life.  There has been no 5,000 word opus in The Players’ Tribune that opens a window into what prompted his retirement, or interview with The Athletic’s Zak Keefer.

Maybe one day Luck will answer completely the question of why he retired, but in the meantime all we have is educated speculation.

Here’s the timeline that is most telling:

Somewhere between March and August a series of conversations between Andrew and Nicole occurred.  Here is what I imagine those conversations sounded like:

Nicole:  I need to tell you something.

Andrew:  I’m listening to you.  I hear you.  What scares you about football?

Nicole:  Concussions, lacerated kidneys, broken shoulders, endless rehab, and the possibility that you won’t recognize me or our child when you turn 50.

Andrew:  That’s certainly reasonable.  I hear you, and I’m not judging, but the game is a great challenge for me.  My teammates and I are entering a phase where a championship is a possibility.

Nicole:  But you and I are now we.  This isn’t about what you enjoy today.  It’s about who we will be 10, 20, 50 years from now.  Football clouds our future.  It puts into play a series of negative possibilities that make sleep difficult.

Andrew:  I can see how you would feel that way.  To be honest, putting my emotional, intellectual, and physical health at risk in order to advance a leather ball toward a goal line seems ludicrous.

Nicole:  We are smart people with a lifetime of challenges ahead of us.  We can use our wealth to help thousands of people.  Our talents may benefit millions.  Is football so important to you – or us – that you feel comfortable taking a chance that all we can be goes away as you get hit by Danny Trevathan again – or another linebacker?

Andrew:  Boy.  That’s a lot to chew on.  You’re right.  My career earnings will total just over $109-million after this season.  I love the game and my teammates, but turning the page to embrace our next set of challenges seems more than sensible.  My heart is torn, but my brain is certain.  Football is what I do; it’s not who I am – or more importantly, who we are.

Nicole:  To be as sure as we can be, let’s take as much time as we can before making the final call.  Keep working.  Take a few months to see if you are comfortable putting football in your past.  I know rehab is exhausting, but you owe it to yourself to be absolutely certain.

Nicole prompting deep thinking about Luck’s football future is not Yoko Ono breaking up The Beatles.  It’s a wife pregnant with a first child who sees the potential for disaster with every snap, and the possibility of CTE robbing her husband of his faculties.

Who can blame Nicole for serving as a voice of reason for Andrew – or Andrew for listening and making a responsible decision as a couple with an exceptionally bright and important future.

Colts fans are still pissed off at Luck’s retirement robbing them of a few seasons of great football, but it’s hard to see his decision as anything but reasonable.

The timing wasn’t ideal, but neither are kidney lacerations or concussions.