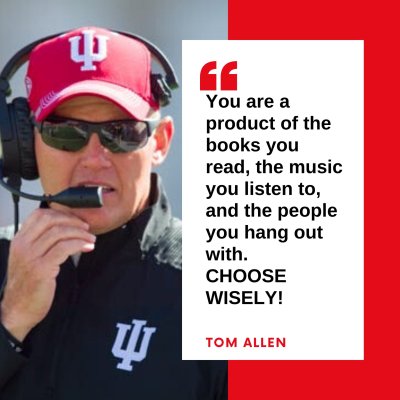 Indiana University football coach Tom Allen tweeted the image to the left on Sunday, and I don’t agree with a word of it.

Many responded to the comment I attached to a retweet of Allen’s message with indictments of our soft society and calls for people to read the right books, listen to the right music, and spend time with the right people, as Allen suggested.

Those concepts bother me.

Who among us is in charge of determining what book’s message is right and which songs are wrong?  What person can judge our character as a product of whose words we read and which music we listen to?  And, who determines which people are right and wrong for us to “hang out” with?

I assume Allen just put that out there as an ill-conceived effort to ask people to weigh carefully their choices, but instead he clumsily stomped onto a slippery slope that dead-ends at censorship.

As a highly paid representative of a university where minds are encouraged to expand, it’s odd to read that Allen believes in some books and music being a corrupting influence.

You can read virtually every word Hunter S. Thompson wrote without becoming a gun toting, whiskey swilling, political cynic.  You can read books by basketball genius Phil Jackson and not become a Buddhist, or listen to Tupac Shakur and not embrace Thug Life.  Millions laughed at Bill Cosby and watched the films produced by Harvey Weinstein, but no one raped women as a result.  You listen to Barry White yet strike out with the ladies.  You might play Call of Duty or Grand Theft Auto but abhor violence.

People should try to understand life from a variety of perspectives.  We should learn from those unlike us rather than turn our backs because they don’t share our beliefs.  We should empathize rather than reject as dangerous those who are different.  That can be done, ironically, through reading, listening and hanging out.

Literature and music are among arts created to engage and outrage.  Discouraging consumption of it is narrow-minded and can extend as far as xenophobia.

Again, I doubt Allen was advocating a society where cultural choices are mandated by the state. I don’t think it was that deep.  He probably lays his head down every night after saying a prayer for the safety and good choices of his family, players and coaches.

Caring about those you lead is important, and his extreme version of caring was likely the chief reason he was tabbed by Fred Glass as the successor to Kevin Wilson.  Caring deeply about people is one of the chief attributes of a great leader.

Leaders like Allen need to be confident in their convictions.  But just as with all the vices he decries, piety is best embraced and delivered in moderation.