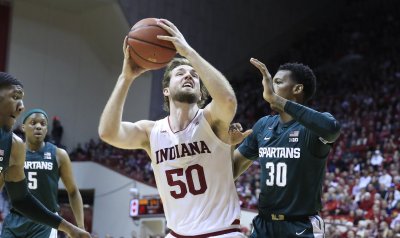 Joey Brunk was good last night. Can the Hoosiers find their way into a first place tie this Sunday?

Indiana earned a fascinating win against Michigan State last night at Simon Skjodt Assembly Hall with connected defense when it mattered and a couple of timely baskets by Joey Brunk and Armaan Franklin.

The win lifted IU’s Big 10 record to 5-3 and dropped the Spartans into a first place tie with Illinois at 6-2.

Wait.  What?  Indiana is one game out of first place in the Big 10?  That’s right.  With a home game this Sunday against Maryland, the Hoosiers could be playing for a share of the Big 10 lead almost halfway through the conference schedule.

Indiana isn’t alone one game behind.  They are tied with Iowa, Maryland, Rutgers and Wisconsin.  Teams that were expected to contend for the conference title – like Purdue, Michigan and Ohio State languish near the bottom of the standings.

It’s early, way too early, to write off the Buckeyes, Boilermakers and Wolverines, nor anoint Indiana, Illinois and Rutgers as legitimate threats to win the a regular season title.  But there is no doubt that excepting Nebraska and Northwestern, the Big 10 is filled with teams than could claw their way to the top.

The Big 10 used to reward four loss teams with a title.  14-4 would likely get it done.  This year, the winner(s) could wind up with six blemishes.  Six!  That’s straight-up unprecedented bananas.

No one looks at Indiana as a potential champion this season, but you know what, why not?  Why can’t IU beat a very young Maryland team Sunday afternoon?  And if they can beat Maryland, why can’t they find a way to steal a couple of road wins at Penn State and Ohio State.  Hell, Minnesota is historically terrible away from The Barn but found a way to win in Columbus last night.  The Hoosiers can’t?

Then Indiana has two home games against Purdue and Iowa.  Okay, it’s a stretch to expect a team without a backup point guard that shoots free throws like they’re blind to roll through a series of wins over teams who are at least their equal, but with every win the immediate future gets a little bit brighter.

Most sane Indiana fans have their fingers crossed for 10 Big 10 wins and a trip to back to the NCAA Tourney for the first time since 2016.  Anything beyond that is a huge bonus, but optimism is starting to creep into IU fans’ psyche in a way unfelt in a few years.

It could all go in the crapper very quickly for Indiana if the Hoosiers start stacking losses while Michigan and Purdue rebound to win in the measure expected before they ran into tough stretches recently.

Unpredictability of the Big 10 has been IU’s best friend through eight games, and that might continue – or it could either become their worst enemy.  Who the hell knows?  They could get run out of Assembly Sunday, or they could leave the court 6-3.

A win coupled with losses by Illinois at Michigan and Michigan State at Minnesota, would vault the Hoosiers into a first place tie.

It’s all so screwy, trying to predict outcomes of individual games is virtually impossible, so projecting an order of finish come March 8th is a total crap shoot – so let’s shoot craps!

We’ll eliminate Northwestern and Nebraska, but include the other 12.  We’ll roll two giant wooden dice for each of the top 12 teams in their current order from first to 12th.  A seven sets the team in the highest spot available.  For example, Michigan State’s roll comes first.  A seven would place them first.  Anything else, they roll again after all other teams have their turn.

And here we go!

The complete order of finish of the top 12 was determined off camera and here it is!

A lot of chaos would have to transpire for this to come to pass, but do you want to bet against it?