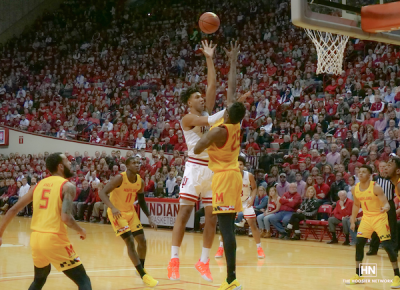 Indiana lost yesterday, and that’s all fans will remember – the 77-76 loss to Maryland.  Moral victories, after all, don’t earn bids to the NCAA Tournament.

But the Hoosiers didn’t simply lose at Simon Skjodt Assembly Hall, they lost while playing better than they had all season.  The offense moved the ball inside and then kicked it out for open threes.  The defense, a little bit late to recover on Maryland shooters for the first 15-minutes, tightened the screws in the second half and took over the game.

Maryland was the #17 team in America, and Indiana led by six with less than 90-seconds left in the game.  The Hoosiers wouldn’t score another point – victims of a turnover and two missed shots.  Trayce Jackson-Davis’s final shot with three seconds left from inside of five feet was especially galling because he makes that shot far more often than he misses.

But that miss was just the final misstep, not the only failure.  Rob Phinisee’s missed front end of a one-and-one opportunity while up seven with 5:31 left was huge.  Devonte Green’s blown lob pass in the second half seemed innocuous at the time, but cost Indiana a chance to build the lead.  Up seven with 3:52 left, Al Durham fired from deep with 23-seconds left on the shot clock.

The point isn’t to specifically point at IU players who screwed up and caused a win to become a loss right before their very eyes.  It’s to show that basketball is a funny game that can be brutal in the way it penalizes indifference to precision and discipline.  Lose focus for a possession and the penance is blowing a winnable game.

Possession of the basketball needs to be treasured.  All that tedious work on free throws is rewarded while the decision not to shoot another 100 every day is punished.  Lessons leading to success become habits through failure.  The ability to close games as a unit comes from disciplined execution.  Indiana was held accountable for failures yesterday, and that might be exactly what they need to succeed over the final 11 games of this wobbly season.

The Big 10 is tight enough to reward the team that executes best during the final two minutes.  Ken Pomeroy’s metrics project that the five games Indiana should win over the next six weeks will be decided by a total of 12 points.  The six games IU is scheduled to lose will be decided by an average of five points.  Close games are won by – repeat with me – the team making the fewer mistakes!

Adversity of a hell of a teacher in sports.  Indiana got a nice dose yesterday in a game they should have won but didn’t.  If the Hoosiers have any chance to reach their potential, each player looked in the mirror last night and berated themselves for their error that would have changed the game.

College is meant to be a place of learning, and if Indiana properly processes the information from yesterday, the lessons might help them win games they they might have lost had Jackson-Davis’s shot fallen, Phinisee made the front end, Green not tried to make the flashy play, Hunter took better care of the ball or Durham been more patient.