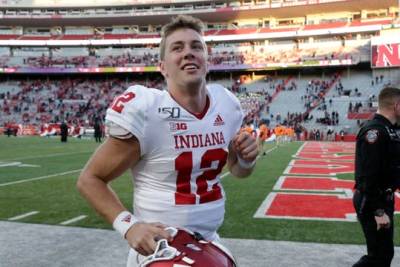 Peyton Ramsey has entered his name in the NCAA’s Transfer Portal.

The quarterback room at Indiana University potentially got a little less crowded today.

Incumbent IU starting quarterback Peyton Ramsey has entered his name in the NCAA’s transfer portal for the purpose of finding a new home for the 2020 season.

If Ramsey chooses to leave Indiana for a program he perceives to a better fit, he will be eligible to compete immediately as a grad-eligible senior.

With Ramsey as the starter for the majority of games during the 2019 season, the Hoosiers enjoyed an 8-5 season that ended with a trip to a Florida bowl for the first time in program history.

Ramsey lost his position as starter to Michael Penix prior to the season opener, but because of a shoulder injury to Penix, Ramsey found his way back into the starter’s role, where he excelled.

Whatever the reason for Ramsey’s decision, the NCAA rules allowing Ramsey to play immediately is a very positive thing.  If an athlete can graduate in just three years, what would the point be of forcing him to sit for a year at another institution while awaiting his eligibility to re-engage.

Whether Ramsey’s decision to enter the portal is a repudiation of coach Tom Allen’s leadership or a simple decision to seek a new home where he is guaranteed a starter’s job we’ll never know.  Ramsey is far too classy to air his grievances in the media.

Whatever his motives, if Ramsey leaves, he will avoid another protracted battle with Penix for the IU gig.  If he had returned to IU and Penix remained healthy, his senior year after three as the starter may have been spent on the bench.