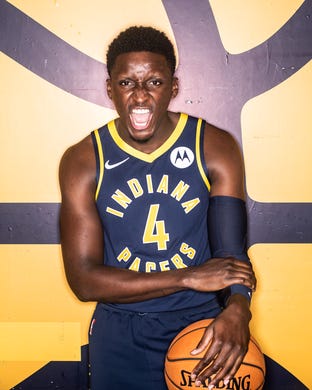 Victor Oladipo will be welcomed tonight by roars from thousands of fans, but the noise he will hear loudest is his own confident voice.

There has always been more to Pacers guard Victor Oladipo than outrageous verticality, cat-like quickness, and contagious energy.

He’s been a wise and confident young man since showing up as a lightly recruited freshman at Indiana University.  I interviewed Oladipo when he got to campus, and I felt like he might have been the most likable and employable 18-year-old I had ever met.  He was sure of himself without being cocky and very comfortable as the focus of attention.

Overcoming the adversity of being undervalued as a DeMatha High School senior was nothing new to him.  He was lightly thought of as a sophomore too – rarely getting any varsity playing time.

Oladipo’s answer then was to believe his hard work would yield a positive result, and that it was his vision of playing at the highest level would become reality he his belief and work ethic remained unshakable.  That lesson has served Oladipo well as he spent the last year rehabbing his rare quad tendon tear.  It’s so rare that there is no playbook for an elite athlete regaining his physical gifts.

When an athlete tears an ACL, doctors and trainers can plot the course of rehab because so many have suffered and recovered from the same injury.  No NBA player under 30 has ever torn his quad tendon, so no one had any notion of the prognosis, timeline or success of the rehab.  Oladipo is the first of his kind.

In rehab, Oladipo employed the same tools to overcome adversity he used at DeMatha, Indiana and with the Orlando Magic as a second overall pick who didn’t immediately live up to expectations.  He also lessons learned through watching and emulating the late Kobe Bryant,

“When I was in Orlando, it wasn’t easy for me,” Oladipo said yesterday.  “I heard it all from being a bust to not being good enough to being benched to coming off the bench to everything.  My mentor used to tell me about Kobe the entire  time.  It was Kobe, Kobe, Kobe, Kobe, Kobe.

“I used to watch Kobe videos.  Sometimes if you look back at my old interviews, you’ll see stuff that Kobe says.  That’s where I get it from.  ‘Even keel.’  ‘Not getting too high not getting too low.’ That’s Kobe.  ‘I don’t fathom failure.’  ‘Failure isn’t real.’  That’s Kobe,” Oladipo said.

So tonight, Oladipo will return to the same floor where he proudly announced, “This is my city!” after electrifying the crowd with a game winner early in his first season with the Pacers.  Many of the same fans will be there hoping the magic can return.

Fans’ expectations will be high tonight, but likely dwarfed by Oladipo’s own.  He said yesterday he wants to get 40, which is absurd, but no more so than anything else Oladipo has accomplished.  Tonight though isn’t about points scored, but how he and the Pacers can take a step forward as Oladipo’s return interrupts an already successful mojo.  Oladipo is confident he will be a force for good on a team with designs on big results this postseason.

That’s always been the way it’s been with Oladipo.  His confidence has always overcome the doubters who believed he would fail in high school, then Indiana, with the Magic, Thunder, and Pacers.

Believing in himself prepared Oladipo to excel at each level of basketball he’s played, and it gave him the strength he needed to embrace the lonely challenges unique to a year-long rehab.

Tonight will be another step in that rehab – work that will continue, according to Oladipo, until his playing career ends.  But it won’t be lonely, as teammates and fans will be right there with him the rest of the way.

This is just the next chapter in an already fascinating life and career.