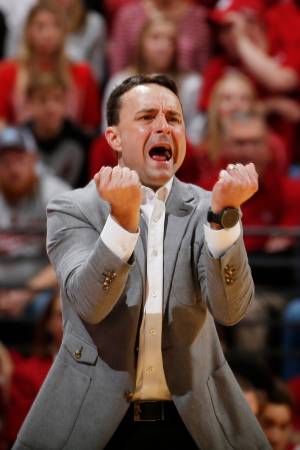 Indiana lost at Penn State, and social media was filled with condemnations of Archie Miller.  A week before, Indiana beat Michigan State at Simon Skjodt Assembly Hall, and fans cheered that Indiana was finally back.

The Hoosiers will play Ohio State in Columbus tomorrow, and fans will voice their unbridled joy or despondence at 2 p.m. depending upon the result.

There are bipolar fanbases in college basketball, but I don’t know any as prone to extreme highs and lows as Indiana’s.  Cries to “Fire Archie!” are heard and read after each loss.  When Indiana wins, fans believe a return to the Final Four is nigh.

A quieter sane group continues to watch and checks boxes that mark areas of progress, but they are easy to miss because they don’t produce hundreds of screaming Facebook and Twitter comments responding to a podcast that calls for fans to relax and embrace the journey.

10 – Crazy fans are part of the problem.  Who wants to deal with a bunch of social media nuts?  No one.  Not coaches or players.  Certainly not their families.  It can be exhausting for people who aren’t used to it.  Indiana fans have developed a well-earned reputation as kooks, and that does not help the current players – or those who might be considering playing at IU.

9 – Devonte Green is not trying to drive you crazy!  Green tries to help Indiana win by making plays.  Sometimes those plays result in turnovers and bad shots.  That’s his game.  Celebrate the makes and mourn the misses if you like, but know that he’s trying to do the right thing regardless of your perception.  Green is not evil, just a streaky player who sees basketball as an individual test.

8 – College basketball is filled with mediocre teams.  For a variety of reasons, the talent level has flattened.  The Big 10 is a mess from the top through the 12th spot.  Other than Northwestern and Nebraska, any team can win against any other team on any given night – especially at home.  There used to be a top, middle and bottom tier.  Not anymore.  There is a bloated middle with a few stragglers.

7 – Miller WILL be Indiana’s coach through 2021-2022.  Until the end of that season, Miller’s buyout is 100% of the money due him through the end of his contract (2024).  There is no chance IU is going to eat that expense unless Miller steps way outside societal norms.  You might as well enjoy Miller’s efforts to recruit the State of Indiana and build the program from the bottom up because that is what is going to happen.  A loss at Penn State will not cause Fred Glass or his replacement (or any reasonable person) to consider bouncing him.

6 – Ohio State is 3-6 in the Big 10 with Chris Holtmann as coach.  Many IU fans have looked at Ohio State as an example of a program that has evolved positively since replaced Thad Matta a few months after Indiana fired Crean.  Holtmann’s Buckeyes are struggling, and the cries for IU to regret hiring Holtmann away from Butler have quieted.

5 – Cook Hall is no longer a competitive advantage.  The facilities race across college hoops cannot won by any school because the means to put up Cook Halls exist at all power five programs.  Without a quality practice space, programs can’t compete, so all have built them.  We think Cook Hall is cool, but recruits see them everywhere.

4 – Miller is building a culture through recruiting, and that takes time.  Indiana was one specific type of program under Crean, and it is evolving into another as Miller successfully recruits Indiana high school players.  His first two classes brought Indiana’s Mr. Basketball and other All-Stars to IU.  That’s the first step toward getting the SS Hoosier headed in the right direction, and it requires patience.

3 – Building a culture happens over many years, not months.  Crean won two Big 10 titles through acquiring talent.  Superior talent can win games, but it’s only a predictable source of competitive advantage at programs like Kentucky and Duke – de facto minor league way stations for NBA bound players.  Culture brings consistent success.  Getting that squared away is work that requires patience.

2 – Firing Archie Miller would cripple Indiana’s chances to hire the right coach.  Let’s call this Miller’s Razor.  If Miller is not the right guy to coach Indiana, firing him will destroy IU’s chances to hire the right coach.  Coaches are not fools.  They look at the treatment of their peers as a bellwether of their treatment if they accept the same position.  Coaches look at Crean’s termination as explainable and his longevity as enviable.  He had nine years and earned over $25-million.  If Miller is fired after three years, hot coaches will see a university too impatient to build a program correctly.

1 – Becoming Indiana as it existed in the 1970s and 1980s is impossible.  Recruiting has changed and coaching has changed.  The wealth generated by winning has become extraordinary.  As a result, cheating is the rule rather than the exception.  Kids are going to get paid tens of thousands in order for coaches to be able to get paid millions.  That is part of the reason for the flattening of talent across power five conferences.  Indiana finding its way to the top of the Big 10 an astounding 11 times in 24 years as it did under Bob Knight is not possible when players and their families are in it for the cash.