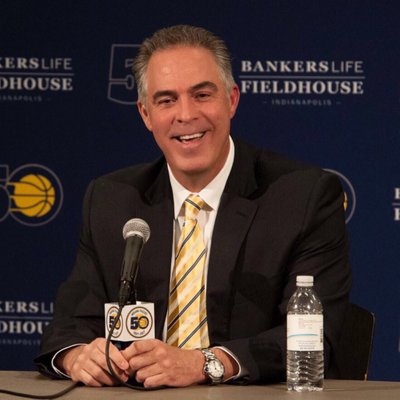 The NBA Trade Deadline is coming this Thursday, and with just a hair’s difference between the second through sixth place team in the East, GMs could be very active I trying to gain an advantage.

Indiana Pacers president Kevin Pritchard is no stranger to rolling the dice on a headline grabbing deal, but this time around it’s very likely he’s going to listen politely to pitches from rivals without pulling the trigger, unless someone offers trade equity for a non-rotational player.

Of the five teams, the Pacers are the least likely to make one of the deals for many reasons.  Here are the top five:

5 – Nate McMillan has a low threshold for drama.  McMillan is an easy guy to read.  Sailing calm waters, he smiles and enjoys his job.  When there is drama, Nate tightens up.  Distractions bother McMillan because they get in the way of winning.  A trade would be a distraction.  We saw how that works in 2014 when Danny Granger was sent to the 76ers for Evan Turner and Lavoy Allen.  The Pacers started that season looking like favorites to go to the NBA Finals building a 41-13 record before the trade.  After the deal, they went 15-13.  The Pacers already have their share of drama with Victor Oladipo’s return.  They don’t need more.

4 – Pacers have few pieces to deal.  Justin Holiday is the only expiring contract among the rotational players, and their first round pick will go to the Milwaukee Bucks as part of the return for Malcolm Brogdon.  They could trade T.J. Leaf for some low level draft equity, but that isn’t the kind of deal we are talking about.  Aaron Holiday could go if he’s incensed by a lack of use since Oladipo’s return, but the Pacers are better with him than without so a deal won’t be initiated by Pritchard.

3 – Pacers are not one player away from NBA Championship.  At the deadline, teams generally look to build for the future or try to get the final piece of the current puzzle.  The Pacers like their roster for the present AND the future.  It’s not ready to win a championship, but there is no logic in guessing at what players are key cogs and who is expendable before the end of the season.  Unless an idiot GM rolls out a Brink’s truck of assets for Myles Turner, there’s no urgency to complete a swap.

2 – Pritchard did his heavy lifting in the offseason.  When Pritchard acquired Brogdon, T.J. Warren, Jeremy Lamb, T.J. McConnell and Goga Bitadze, he set the rotation for the next two seasons.  If Oladipo signs an extension, every key cog would be locked down through 2022.  The future of the Pacers will be determined by how this group develops together, not by what Pritchard does to reshape the roster.

1 – Victor Oladipo is the piece the Pacers need.  If the Pacers were going to address a roster hole, Oladipo would be a pretty good place to start.  His defense and ability to get to the rim are areas of need for the surprise team in the Eastern Conference.  Thankfully, his return to health coincided with the Pacers beginning its stretch run.  With the Pacers already preoccupied with Oladipo’s return, more roster tumult would be especially chaotic.