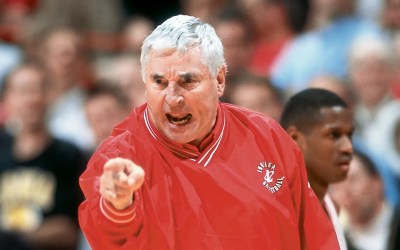 Bob Knight once prowled Assembly Hall with tremendous fury. Tomorrow, he may make a public return. If it happens, some will cheer. Others will avoid the moment.

Maybe Bob Knight comes back to Assembly Hall for tomorrow’s game against Purdue.  Maybe not.

These rumors have popped up many times before.  This might have roots in truth as Dick Vitale doesn’t do games in Bloomington much anymore, and he’s been banging the drum for Knight to bury the hatchet and come back for years.  If not for Knight coming, why would Vitale ask to be assigned to a game between two mediocre Big 10 teams?

Knight and former Purdue coach Gene Keady will be honored at Bankers Life Fieldhouse Saturday night as another of the endlessly cool Hickory celebrations of basketball the Pacers host.

It just kind of makes sense this time around, so the conversation is echoing again among a fanbase searching desperately for something to looking forward to.

For some, Knight’s return to Assembly Hall is the story of an old cranky guy returning to a place he worked for 29 years.  It’s barely registers as a blip of their radar.  They are either too young to remember when Knight was relevant in college basketball or at IU, or they just don’t care.

Others see Knight’s return as a sign detente is possible between their university and their coach.  They continue to cheer for Indiana, but remember with great fondness when the General paced the sidelines, won championships without cheating, and served as an extreme irritant for all opponents who dared enter his Hall.

They saw Knight’s firing as an unjust end they could never forget to an era they never wanted to end.

Here are five reasons those who revere Knight may shed a tear when he walks back into Assembly Hall:

5 – Maybe Knight’s return will allow part of his legacy to return.  There has always been a sense that despite ceremonies and statues, Indiana University did not much care for either Knight or those who played for him.  While other programs with iconic leaders kept leadership in the family, Indiana has always reached outside Indiana for coaches.  Despite the culture of excellence and accountability Knight helped build, IU keeps trying to reinvent the wheel.

4 – Hope that men can change.  Even Knight’s biggest fans admit that he is flawed.  One of those flaws is pride, and it would be wonderful for them to see Knight embrace the notion that the world and Indiana University do not and did not ever revolve around him.  He’s had opportunities to swallow that enormous pride to make an appearance at various university functions to honor the 1976, 1981, and 1987 championship teams.  He chose not to.  He asked not to be depicted among his players in statues in an effort to deny his existence among them.  It would be nice to see Knight embrace his place alongside those players.

3 – The Simon & Garfunkel Dynamic.  The 1981 Concert in Central Park didn’t draw 500,000 people because there was a longing to hear the harmonic troubadours croon “Sound of Silence” one more time.  They wanted to see old friends become important to one another again.  They wanted to witness forgiveness.  Assembly Hall is Bob Knight’s Garfunkel.  Fans want to see them together again.

2 – IU fans want to say thank you in a very public way.  Those who enjoyed the success Knight and his players brought to Bloomington have always wanted to send Knight into his twilight with an ovation.  There was the get together in Dunn Meadow after he was fired, but that was hardly an event befitting the end of Knight’s reign.  This can finally be the moment where Knight is made aware of the depth of affection many feel for him.

1 – Guilt.  Indiana fans who loved Bob Knight have always felt oddly disloyal because Knight made it known that no fan of his could ever be a fan of the university that spurned him.  With Knight’s burying the hatchet, they will feel absolved for continuing to care about their university and cheering for their team.

Here are five reasons who are either loathe Knight or are indifferent would rather he not come back:

5 – Loyalty to IU, not Knight.  A former player once told me that he responded to Knight’s son Tim criticizing him for attending an IU game after Knight was fired by saying, “I graduated from Indiana University, not the University of Bob Knight!”  While there are people who backed Knight in his dispute with IU, there are also those who remained loyal to Indiana and view Knight as a self-indulgent and self-destructive force they avoid.

4 – A man and building reconnecting is irrelevant.  If this was former IU president Myles Brand sitting down with Knight for a conversation where both admitted their flaws, that would be one thing.  But a man forgiving a building – or even stranger the perception of a building forgiving a man – is ridiculous.

3 – Boy who cried wolf effect.  There have been unceasing rumors of Knight’s return since Fred Glass became athletic director, and none have come to fruition.  Four weeks ago, Knight was believed to be headed to Assembly Hall to see Ohio State play IU.  Instead, he went to a Marian University game.  This was seen by some to be an act of defiance – one more thumbing of his nose at IU and his sycophantic fans.

2 – Irrelevance.  Knight was fired before they many students were born.  There isn’t a traditional undergrad at IU who has any cognitive memory of Knight on the sidelines for Indiana.  To them, Knight is what Branch McCracken was to students in the 1970s and 1980s.  These students remember Tom Crean with nostalgia, not Bob Knight.

1 – Knight may be older, but he still represents arrogance and intolerance.  For those who focus on the stories of angry tirades, bizarre expressions of outrage too many to list, and the reasons for the zero tolerance policy that led to his dismissal, Knight is still a pox on Indiana University’s image.  Honoring him is an outrageous outreach to an unapologetic bully.  Knight is best forgotten rather than feted.