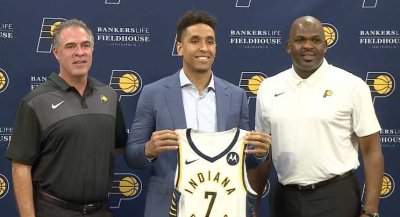 The Pacers won’t have another media availability like this tomorrow.

Last night’s Pacers collapse in Toronto was horrifying.  Leading 118-108 with under two-and-a-half minutes left, they allowed the Raptors to score the final 11 points to snatch defeat out of the usually reliable arms of victory.

That was the third straight loss for the Pacers as they try to adapt to the return of Victor Oladipo.  It’s not a challenge to see how the rhythm of this formerly fun-to-watch team has eroded.

That’s the magic and art of basketball.  Addition can cause erosion, and subtraction can sometimes bring improvement.  That’s what makes the NBA’s trade deadline day so fascinating for fans.  Who’s willing to push a tall stack of chips to the middle of the table to try to gain an edge.  Forget that the results are often disastrous – it’s fun to watch.

Given this recent spate of poor play, Pacers fans are wondering what team president Kevin Pritchard might do to correct the roster to get things back on track.

I’ll tell you what he is going to do – nothing more than listen politely to rival GMs trying to lowball with an offer for Myles Turner or Aaron Holiday.  Maybe swap T.J. Leaf for a second round pick, or something like that, but nothing substantial to impact the immediate future.

Fans are crazy people.  We look at a three-game losing streak as a cataclysm, especially when last night’s game was caused by one of the worst collapses in team history.  Up 10 points with less than two-and-a-half minutes left should be an automatic win.

I’ll tell you what Pritchard woke up thinking about this morning – last night’s cave in, sure, but also the 43-18 ass-whooping the Pacers put on the Raptors in the second quarter.  He’s also thinking about how the Pacers were better than expected with a 31-17 record.  Pritchard has the discipline to see both the forest and the trees, and his behavior today will show that.

Myles Turner is a 23-year-old under contract at a manageable number through the 2022-2023 season, and while production has slipped this season as he shares the floor with Domas Sabonis, he is still a big piece of the current and future Pacers puzzle.

Aaron Holiday is a key to the Pacers continuing to be competitive if Malcolm Brogdon or Oladipo miss time with an injury.  If the Pacers are going to deal him, the bounty in return would have to be unreasonable.

There is also the matter of trades being dramatic events for teammates.  The Pacers are already dealing with plenty of drama.  Coach Nate McMillan is especially keen on avoiding drama.  Adding to the strife they are already experiencing is unacceptable to him.  It should likewise be seen as unwise by everyone else.

A trade that brings one more step back to generate two future forward steps might cripple the Pacers efforts to succeed in the short-term without any guarantee of long-term gain.

The Pacers got closer to being the team they want to be last night against the defending NBA champs on their home court.  Kawhi Leonard is no longer with the Raptors, but their 37-14 record shows the quality of their play.  That step in the right direction is likely to yield more positive steps, and the Pacers don’t need to put more hurdles in their own path with tumult of their own choosing.

So the Pacers will stay quiet today.  It’s not as much fun, but hopefully April and May can be a big party in Indianapolis because of today’s relative silence from the Pacer front office.