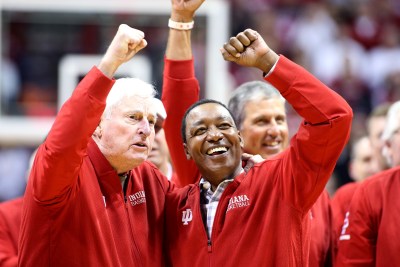 Bob Knight coming back to Assembly Hall didn’t matter to me – until it happened.

To watch a frail Knight walk back onto the court where he built champions tempted me toward sadness until he was magically transformed by the enthusiastic crowd and loving embraces from dozens of his former players into the towering figure long time IU fans remember.

From 1971-2000, Knight was an intimidating and burly presence wherever he went in Bloomington.  I remember seeing him with the family of a recruit walking toward me down a hallway in the Indiana Memorial Union.  I slid over to a stairway and climbed.  I had no idea where it headed – other than away from Knight, who appeared to be an angry 12-foot tall monster.

I’m rarely intimidated.  People are people, and after a childhood of being yelled at by a man with easy access to high volume anger – my dad – I was calloused to the potential for negative interactions with almost everyone.  For some reason though, that flight of stairs in the Union seemed a very wise choice.

The Knight who required a steadying hand from Quinn Buckner as he walked slowly down a hallway he is more familiar with than any man alive was no longer intimidating – until the crowd roared and his former players enveloped him in a massive collective embrace.

This day came later in Knight’s life than it should have, but that didn’t matter today.  Arguing with perfection is folly, and despite the flawed basketball the Hoosiers offered against Purdue, Knight’s return made the day perfect.

There should have been an orderly evolution from Knight to whomever was chosen to replace him when he retired.  That didn’t happen because of the actions of a variety of people – including Knight himself – who never missed an opportunity to make days longer for those tasked with managing him, (as though such a thing was possible).

Today, all was forgiven.  The university that employed/spurned Knight welcomed back the insubordinate coach who taunted and mocked presidents, trustees and athletic directors with the same passion with which he led teams.  Knight finally allowed himself to be adored in a way he has always rejected.

Sadly the halftime celebration was easily the highlight of the day for Hoosier fans, who witnessed another poor performance from a team that has completely unspooled over the last two weeks.

Knight exhorted the crowd to chant “Defense!” immediately after imploring 1987 hero Keith Smart to get in a stance,  Both the crowd and Smart wisely complied.  Knight left, and so did the defense as IU lost 74-62.

Fans who waited years for Knight to finally come back were thrilled by the pageantry and spectacle of the moment.  It was certainly more fun than waiting for the current IU team to defend and score as Knight’s teams did.

Knight came back and if you didn’t care much about it before it happened – watch the video.  Whatever you think about Knight, this was a sweet, raucous, rapturous, and momentous afternoon for a man who shared a rare vulnerable moment with those who love him.