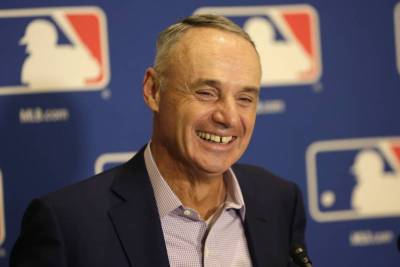 Rob Manfred is paid to grow the game as MLB commissioner, but a cash grab through expanding the playoffs might do just the opposite.

MLB’s proposed new playoff system is a complicated cash grab from greedy pirates whose thirst for cash is unquenchable.

Head pirate Rob Manfred appears to be a man unafraid of change if it nets owners a few bucks.  Sometimes that’s a good thing, sometimes not.

File this proposed change to baseball’s playoff system as a big steaming pile in the ‘sometimes not’ file.

Here’s a thumbnail of the complicated changes – if such a thing is possible:

Maybe I’m not terribly bright, but I developed a searing headache as I had wrote and re-wrote those steps four times to get the scenarios correct.

This change, not surprisingly, is motivated by baseball’s unquenchable desire for cash.  It serves no other purpose.  More games, more cash.  And the players union won’t be upset because more teams in the playoffs means more players getting a playoff share.  The owners love it because playoff shares for these nationally televised single games are less than what many rosters earn for a regular season game.

It’s a win-win for everyone but the fans who will get weary trying to figure out how the hell this crazy system works, whether their favorite team will qualify, and whom they will battle in a play-in game.  It will make the regular season less important, and it will challenge the longstanding (old) fans to adapt to yet another postseason format.

There are parallels between this playoff schematic and the NASCAR points system that underwent changes a few years ago.  Races are now run in stages where points are awarded.  It used to be that races involved a start and then checkered flags.  The car in front won.  NASCAR was simplicity itself.  There was nothing better on a Sunday than laying on the couch watching cars drive fast in circles.  Now, at least in part because of the insanely complex point system, TV ratings are down and attendance at many venues has plummeted.  The Brickyard 400 used to sell-out the Indianapolis Motor Speedway.  Now, empty seats easily outnumber the fans, and I watch something else while on the couch each Sunday.

Expanding the playoffs is a cash grab, and thinking there are no consequences is dangerous.  Baseball is both driven and hamstrung by its respect for history.  Turning the playoffs into an all-inclusive battle royale is as shortsighted as juicing the balls to create more excitement through additional home runs.  After all, if home runs aren’t rare, their value diminishes.

At some point, adults in baseball’s boardroom need to stand up and say, “Enough!”  Fans are dopey, but even they eventually feel manipulated by greedy thug owners who keep squeezing them for more and more cash.

Major League Baseball is dangerously close to becoming the corporate equivalent of those tourists at the Grand Canyon who creep closer and closer to the edge of a cliff to take a unique selfie.  Every once in awhile one of them goes a step too far and plunges 1,000 feet to his or her doom.

More is not always better.  If baseball enacts this plan, it might learn that lesson the hard way.