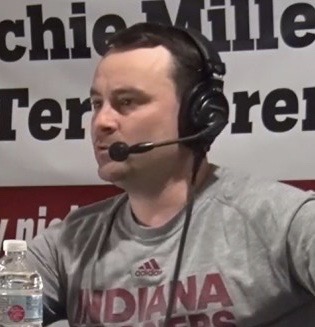 Most Mondays, Archie Miller promises change. Fans are tired of the talk without action.

“At some point, you have to draw the line. If you don’t want to be a part of winning, you’re not going to be a part of what we’re doing,” Archie Miller on his radio show, Monday, February 10, 2020.

That line needed to be drawn in December when Indiana’s flaws and disconnectedness were obvious despite winning all but two games before the first of the year.

In fact, that line needed to be drawn long before that – beginning with the recruiting process when the coach and player relationship begins to form.

A team becomes what a coach tolerates just as a business becomes what the owner or GM tolerates.  Indiana has become what Miller has tolerated – which is a not very good team with disparate parts that seem to be operating in opposition to one another.

Miller has claimed to be frustrated with his team, and who can blame him?  Given the quote above from last night’s Archie Miller Show, we can infer he’s not happy with the buy-in from his roster.  As with bosses at any level, frustration is owned by the man in the mirror.  Frustration is created by a lack of control.  It is corrected by a cycle of demand and accountability.  That’s called effective leadership.

Indiana needs to become Miller’s team, whatever that means to Miller, and whatever it takes to get it there.  Right now, clearly it is not.  Until Miller takes control, the Hoosiers will continue to wobble.

We’re not in the room or gym, so it’s impossible for fans and media to understand exactly what’s going on within the Indiana Basketball program.  It’s unfathomable Miller is the only guy with say over his roster or discipline of his team.  Why would anyone put himself through the living hell of this cycle of watching the same players behave in the same way and achieving the same results?

This isn’t necessarily an indictment specific to Miller.  We can’t conclude he’s the only one responsible for this atmosphere of tolerance, but his name is on the door.  He’s the guy earning over $3-million for running the show, so he needs to run it.  Fans are thirsty for anything resembling leadership, and they have grown tired of platitudes.  There are probably a significant number of players who feel the exact same way.

Whatever is happening in Bloomington – it needs to change.  No more words.  Action speaks to players who become teams.  Action will also speak to Indiana fans, who crave progress if not excellence.

The time for Miller to demand the Hoosiers become a team was nearly three years ago, but I’ll settle for today.