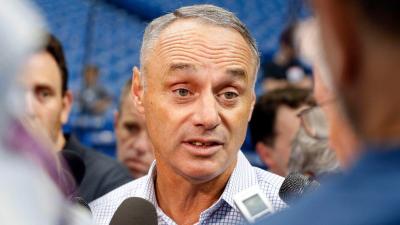 Crises define commissioners, and that is not good news for MLB’s Rob Manfred.

When NBA commissioner Adam Silver was presented with his first crisis in 2014, he understood the importance of the moment.

He embraced his role as protector of the game.

When a recording of Los Angeles Clippers owner Donald Sterling revealing himself to be a racist was aired, Silver convened an astute group of advisors to decide the right course of action.  As a result, Sterling was forced to sell his stake in the Clippers, and the league overcame what would have been a long-lasting nightmare in less capable hands.

MLB commissioner Rob Manfred had his moment of truth recently with the Houston Astros cheating fiasco.  He swung and missed.  Like an inexperienced prosecutor trying his first felony case, Manfred gave immunity to every player involved to get to the facts.

No one who stole signals and then relayed them to batters via a rudimentary system of banging on trash cans (and perhaps a buzzer system) was suspended or punished in any way.  Manfred said yesterday that the Astros are being adequately punished through public ridicule.

Actually, this was more like a parent dealing with seven-year-old pranksters, “If you tell the truth, we won’t punish you!”  As with little kids, there was good news and bad news.  The truth being discovered is good, but the only people available for consequences as a result of this “player-driven scheme” non-players.  General manager Jeff Luhnow and manager A.J. Hinch were suspended for one year and then fired by owner Jim Crane.  That’s bad.

I guess public ridicule for Hinch and Luhnow wasn’t enough.

Former Astros bench coach Alex Cora and former Astros designated hitter Carlos Beltran were also fired as managers of the Boston Red Sox and New York Mets respectively because of their roles in the scheme.

Astros players got off without any discipline.  Players for opposing teams are furious with Manfred, and there has been talk of pitchers targeting Astros batters with fastballs in the backside as payback.  Instead of acting in the best interest of the game to punish cheats, Manfred says he will release a new set of enhanced punishments for pitchers who purposefully hit batters.

So, cheaters get a free pass, but players who attempt to correct Manfred’s lapse in discipline with a dose of street justice will face suspension.  Yeah, that makes a lot of sense.  This tactic is taught in Weak Management 101.

Manfred struck out as his clumsy effort to deal with this scandal communicated to players and fans that baseball will tolerate cheaters.  Players learned they can cheat with relative impunity.  Managers and executives might get canned, but like seven-year-olds who tell the truth, players skate.

The Astros haven’t helped matters as Crane apologized but claimed the cheating didn’t affect the results of games.  He said it as though it was self-evident, and then denied saying anything of the sort only one minute later.  Astros players like Carlos Correa have taken a defiant tone with media.  Manfred is getting a little chippy himself as media continues to probe for a logical reason for the free pass to cheats.

Exactly 100 years since the final spring training of the most disgraced team in baseball history, the Chicago Black Sox, the Astros are trying to turn off the noise that will forever taint their 2017 World Championship, assuming Manfred allows them to keep it.

Only one thing is for sure as Manfred continues to inelegantly deal with his first crisis – he’s no Adam Silver.