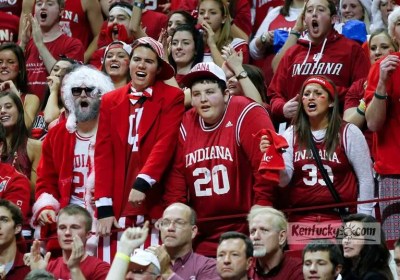 IU fans would like some answers to their questions. They will need to wait – again.

Indiana Basketball fans are exhausted by the seemingly endless malaise surrounding the program.

Day after day, week after week, month after month and year after year, the same questions are asked.  Is IU about to make the turn toward consistent quality basketball?  Is (insert coach’s name here) the right guy to get the program back to consistent respectability?  Are we at fault on some level for asking too much too soon?  Why is IU now the fourth best program in Indiana instead of among the top four in the country?

The answers are the same – again and again.  Optimists see light at the end of the tunnel.  Wait until next year they chant.  We’re about to turn the corner!  Cynics see that light as an oncoming train.  Firing (insert coach’s name here) will bring another restart of the rebuild.  Maintaining the status quo will only bring more of the same.  Where is the good choice?!

Reasonable people say it’s unfair to judge the program under Archie Miller without seeing a roster entirely comprised of players he recruited.  Those same people point to Jay Wright and John Beilein as coaches whose programs finally gained traction in year four.  Other reasonable people point to Brad Underwood at Illinois and Chris Mack at Louisville as coaches who got it done before that magic fourth year.  They also point to John Groce and Tim Miles as examples of patience ill-invested.

One truth that’s certain is that it is damn hard to win games in the Big 10.  Every coach in the Big 10 is capable, but like the old saying goes, “The other guys are on scholarship too.”

Indiana is in a unique position as a national brand with an excellent local farm system.  That brings another set of questions – is a team with Indiana’s best and brightest they recipe for a sixth banner – or should Miller get the most talented players regardless of their home zip code?

Fans with a sense of history know the story of college basketball through 1993 cannot by told without a least one long chapter devoted to Indiana.  It’s also true that IU provides only three short sidebars to the sport’s story since then.  Two of them are nothing to be proud of.

The firing of Bob Knight will always compel conversation because America loves stories of arrogance slain.  The 2002 run to the championship game bears some mention too.  Finally, the Kelvin Sampson scandal is also an interesting moment because – again – an arrogant coach was ousted.

There have been moments like Christian Watford’s shot to beat Kentucky and two regular season Big 10 championships since, but Indiana’s last 20 years pale in comparison to Big 10 peers like Michigan State, Michigan, Wisconsin, and Ohio State.  Today, Indiana has more in common with Illinois and Iowa than the blue bloods.

That’s sad to read – worse to write.  But true.

The worst part is that there is no perfect way out of this tedious cycle.  Stick with Archie and hope for the best – or, write the check for the buyout and hope the new coach is finally the right answer?  Who the hell knows which is the right path?  Will Devonte Green’s graduation free up the rest of the roster to come together and compete – or, will his absence rob IU of its only dynamic offensive threat?  I dunno.

If you began reading this post hoping that your frustration would be magically cured, sorry.  I have no such verbal elixir.  Questions about Indiana’s future will not be answered tonight at The Barn, nor by how IU finishes the season.  This rebuild is almost certainly going to roll into a fourth season (sorry, IU/Beilein fans) with Miller retaining only two of Tom Crean’s recruits – assuming Justin Smith and/or Al Durham return.  A year from now, judgement of his work will be fair.

In the meantime, let’s discuss the increasingly remote chance that Indiana will return to the NCAA Tournament for the first time since 2016:

Here’s the math for Indiana to get back to the tournament – go 10-10 in the Big 10 and 20-11 overall prior to the Big 10 Tourney in Indianapolis.  That means they have to win four of their final six games.

Am I certain Indiana can’t squeak their way into the tournament if they finish 9-11 and 19-12 and add a win in the Big 10 Tournament?  No, but it would be an error by the selection committee to invite the Hoosiers if that’s what happens.  If a team can’t finish .500 in their conference, what right do they have to play for a national championship?

Three of IU’s final six games are at home and the other three obviously on the road.  Predicting the future is a dicey proposition, but expecting IU to win at either Illinois (who won last night at Penn State) or Purdue, who hammered them at Simon Skjodt Assembly Hall earlier this month borders on crazy.

That leaves the three home games (against Penn State, Minnesota, and Wisconsin) and tonight’s road tilt at Minnesota as must-wins.  The Golden Gophers have lost four of their last five – just as IU has.  That provides a window of hope.

According to ESPN, Indiana has only a 29% chance to win tonight, but those odds trump the likelihood they will beat either Illinois (28.2%) or Purdue (20.5%) at their places.

It’s been a long time since the Hoosiers have beaten the odds.  Maybe they are due.  They are certainly in line for a better result in the conference tournament, where they sport a hideous 12-22 record, but that’s three weeks away.

Lot’s of thrills and heartache before the Big 10 comes to Indy.

3 thoughts on “Questions about Indiana Basketball frustrate fans, but we know what it will take for IU to get to NCAAs”