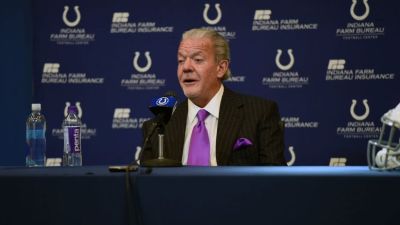 Colts owner Jim Irsay spent some time with Indianapolis media yesterday, and he said interesting things, as he always does.

We never know what Irsay is going to say to the media because he doesn’t know either – at least I don’t think he knows.  On their best days, billionaires are a little quirky.  Irsay sometimes stretches that axiom to its limits.

He said two interesting things yesterday after talking about his family’s investment in helping those battling the disease of addiction.  The first was about retired quarterback Andrew Luck, “Andrew’s my friend and I miss my friend. I loved winning games with him. I loved seeing his happiness in the locker room. But right now, I know Frank has had dinner with him, Chris has had dinner with him. But I can’t comment on anything in terms of – will he ever come back? Is he coming back this year – next year? I don’t know. I haven’t asked him.

“Right now, he’s doing the most honorable thing and the thing I would want him to do the most. He’s an excellent husband and a tremendous father to Lucy. To me that’s where we all start as men and women. We’ll see what happens.’’

It’s been awhile since any reasonable person pondered the prospect of Luck coming back, but after being prompted by Irsay, let’s talk about it.

If Luck decided to play again, which he won’t, why would the Colts trust that a comeback was in their best interest?  Luck left the team 15 days before the season opener in 2019.  What assurance could he provide that he’s serious about playing this time?

From Luck’s perspective, he’s too smart to double back because he’s healed.  Healing is the result of his decision to retire, not a reason to reverse course.

There is nothing wrong with Luck retiring to focus on family, but he left the Colts holding the bag.  A season was lost because of Luck’s decision.  Moving on is best for everyone, and that means addressing a shortfall at quarterback in free agency and/or the draft, not by hoping Luck returns.

Why Irsay entered into this “we’ll see what happens” area of speculation about Luck that will prompt talk for the remainder of the offseason is a great question.  What’s gained?  With Ballard and Reich speaking to the media tomorrow, his comment will certainly prompt additional unnecessary questions about Luck.

There would already have been questions for Ballard and Reich about left tackle Anthony Castonzo, who the Colts would love to have return for a 10th season.  Castonzo told the media after the season that he needs time to decide if he’s going to play again.

Irsay addressed that yesterday, “I haven’t talked to Anthony personally. But he’s a Pro Bowl left tackle and we want him to come back. I think there’s a strong likelihood that he will, but I think Chris will have more on that in the coming weeks.”

All I could hear as Irsay discussed his hope that Castonzo returns was his description of Luck’s biceps tendon being pristine.  That still echos in my head as a reminder of Irsay’s goodhearted and inaccurate pleadings.

Irsay is not a malevolent liar or sociopathic opportunist.  He’s just a hopeful guy accustomed to getting his way.  An underrated businessman, Irsay is used to finding a way to get people to say yes, and he has gotten into trouble for being incapable of saying no to himself and others.

His enthusiasm for what he wants doesn’t make Irsay a bad guy or clumsy owner, but it does cloud our ability to trust his words – and it should.

As the Colts approach an offseason that will either launch an era of winning or perpetuate mediocrity into another decade, I am much more interested in what Ballard says tomorrow than what Irsay said yesterday because he tells the truth.

The truth I trust.  Hope is for fools – and billionaires.