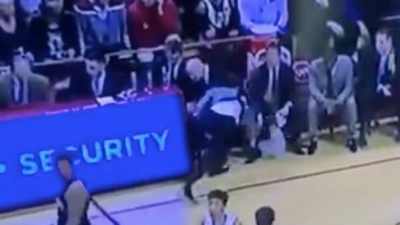 Up and down it has rolled through solid wins against Florida State and Penn State and miserable losses to Purdue and Maryland (2X).  Devonte Green has been a one-man thrill ride with made threes and ill-conceived lob passes with equal enthusiasm.

Coach Archie Miller was intractable in defending screen and rolls with repeated hard hedges, and seemed married to a rotation whether or not it achieved positive results.  Over the past two weeks, he has skinnied the rotation and shown different defensive looks.

Indiana has also become a team hell bent on running the offense through Trayce Jackson-Davis.  That makes sense as Jackson-Davis is IU’s best player.

And today, with an 18-9 overall record and an 8-8 Big 10 mark with four games left in the regular season, Indiana appears on the verge of its first NCAA invitation since 2016.

There is still work to do, but if Indiana can split these four games, its ticket appears likely to be punched.  Road games at Purdue and Illinois are enormous challenges, and Minnesota and Wisconsin at Assembly Hall are hardly guaranteed wins given IU’s propensity for making its own path choppy.

Trying to make sense of anything done by 18-22 year-olds is idiotic.  Behavior wobbles from minute to minute, so expecting Indiana to continue to play at a high level seems silly, but it seems there are some predictable aspects to Indiana’s play.

If only basketball was as easy as making certain statistical mileposts are met.  Scoring 66 points is hard – especially on the road against a good defensive team.  Teams are well aware Jackson-Davis is Indiana’s most predictable offensive weapon, so they devote resources toward stopping him.  Even if IU feeds the post every possession Thursday night at Mackey Arena, there is no guarantee of success.

No sane person wants Phinisee to turn the ball over more often, but steals are a big deal.  Phinisee is finding his game as a sophomore, and now that he’s healthier the wins are coming more often.

Thompson playing 15+ minutes is entirely controlled by Miller.  His contributions have been enormous because his energy has been relentless and he gets loose balls like it’s his job – which it is.  What Miller can’t control is Thompson’s desire to keep throwing his body around to get loses balls.

Not only does Indiana have a chance to be an NCAA Tournament team, it just might have found the right combination of players and scheme to make it a tough out once they get there.

Or, they might forget the traits that put them in this position, lose out and end another season in the NIT!

The only thing that is certain is that the roller coaster will keep rolling.