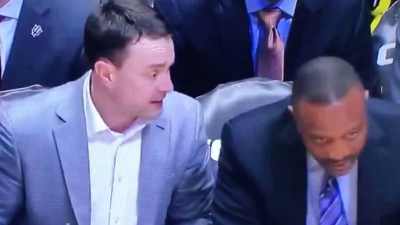 Archie and Bruiser yelling at each other last night might have been the most entertaining part of last night’s loss.

Indiana lost 57-49 to Purdue last night, so fans are again ready for John Beilein to take the reins of the basketball program from Archie Miller.

Prior to last night, fans had calmed themselves as IU had won three out of four and earned the commitment of five-star recruit Khristian Lander from Evansville Reitz.  They were ready to give Miller some time to continue his rebuild.

The sand in that hourglass drained as the clock hit 00:00 at Mackey Arena.

What a difference a terrible shooting night makes.  Fans lost their minds throughout the game and immediately after.  Twitter was filled with silly invective toward Archie Miller, Justin Smith and Devonte Green.  Hell, I added to it myself!

It’s true that Indiana shot the ball like googly eyed fifth graders, hitting just 15 of their 59 shots,  and went more than 10 minutes without a field goal to end the first half and begin the second.  Miller and assistant coach Bruiser Flint were caught on camera barking at each other.  And the team frayed, as it often does when things go south.

That’s the current reality of Indiana Basketball.  When shots fall and things come easy, IU can beat anyone.  When the Hoosiers get uncomfortable, players wither from the challenge of competing, coaches get angry, and fans type furiously on Twitter.

Frustration among fans is driven by stretches when Indiana appears to be very competent, followed by others when it lacks toughness and execution.  Those opposing ranges of good and poor play can sometimes be found during the same game.  Against Penn State, IU got off to a 37-18 start, followed by a miserable second act when they were outscored 30-5.  The final stanza saw Indiana dominate the Nittany Lions 26-12.  Fans’ emotions careened from euphoric to incensed to pleased.

It’s hard to play comparatively well, especially on the road in the country’s best conference.  The opponents are on scholarship too, after all.  It’s especially tough when there are two clear factions on Indiana’s roster that do not operate in consistent harmony.  Let’s call them the Creans and the Archies.

The Creans have players former coach Tom Crean recruited based upon a specific set of criteria – athleticism, length, and potential.  The Archies caught Miller’s eye for different reasons – toughness, basketball IQ, ability to function within a unit, as well as athleticism and length.  Those opposing forces have yet to figure out how to play in consistent harmony, and fans sense their lack of cooperation.

Indiana is still right where reasonable people believed they would be with an 8-9 Big 10 record and three games to play.  Dominating the Big 10 was never in the cards for the Hoosiers no matter how quickly Trayce Jackson-Davis assimilated to the college game.  They still have a solid chance to finish 10-10 and earn a spot in the NCAA Tournament.  That was widely viewed as the best possible result when the season began.

Fans, being the nutty types they are, have exceptionally short memories.  After Indiana beat Penn State, some believed Indiana to be capable of winning out.  When Purdue beat Indiana last night, the same people voiced concern that the Hoosiers would not win another game this season.

According to Ken Pomeroy’s math, Indiana had a 32% chance of winning last night.  ESPN was even less confident in the Hoosiers, assessing their chance of victory at 25%.  Why anyone expected a win at Mackey is between he and his conscience.  Losing is a part of the reality for all teams, and it should be embraced as a necessary evil among fans too.

Of course it’s maddening to watch young men not take seriously their opportunity to compete, but that’s what many 18-22 year-olds do.  The regrets that come from not busting ass every second will drive their work ethic later in life.  That’s the magic of athletics, and one of the reasons participating is so great for kids.

Our own moments of competitive indifference are why we lose their minds.  Watching Justin Smith lope back on defense or Devonte Green take a bad shot early in the shot clock is galling in part because maybe we did the same as we competed in high school or college.  Because we gained wisdom as we became adults, we attack with fury instead of embrace with empathy.

Indiana still has everything it wanted at the beginning of the season right there in front of it.  Judging the season chapter by chapter will drive you crazy – and already has for many.

Take a deep breath.  Understand some lessons are hard earned for college students.  Watch the game Sunday at Illinois with the understanding that winning is a long shot (31.4%, according to ESPN and 33% for KenPom).  If you need to be a nut, yell at the TV – not on social media.

These Hoosiers are fragile enough without your insanity creeping into their news feeds.

2 thoughts on “Indiana Basketball’s loss to Purdue hurt, but all good results still on the table for Hoosiers”