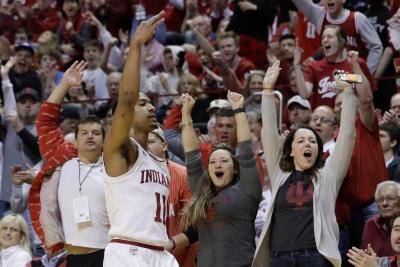 Devonte Green celebrates his game-winning three in front of the fans who have been both thrilled and infuriated by the mercurial senior.

With four minutes left, Indiana trailed by 18 points.  It looked like the Hoosiers’ tourney run might end, and its tenuous place on Joe Lunardi’s bubble quite insecure.  The typical malaise infused basketball that IU has authored during the Big 10 Tournament drove booing fans to the breaking point – and then Archie Miller broke.

After a questionable foul call on Race Thompson, Miller watched the replay on Bankers Life Fieldhouse’s Jumbotron and exploded at referee Bo Boroski.  “What in the sweet heck are you looking at you vacuous and obtuse balding oaf,” he yelled, taking four quick steps onto the floor.

Boroski spun, cocked his head, and teed up the incredulous Miller.  “Don’t say another word!” he yelled.  Boroski and Miller stared at each other for several uncomfortable seconds.

Miller continued screaming more oddly non-profane invective, and lunged at Boroski.  Coaches Mike Roberts, huge in comparison to Miller, and Bruiser Flint grabbed Miller by the upper arm, picked him up and carried him kicking and screaming to the locker room.

With the crowd engaged, the Hoosiers rallied.  Rob Phinisee hit a quick three off a turnover, and suddenly everything that had been so difficult for 36 minutes became easy.  The defense gelled, and shots fell.

Devonte Green hit a 30-footer from the right wing and another from just inside the center circle off the glass to cut the Nittany Lions lead to single digits.  Stops and baskets kept coming until the Hoosiers had narrowed the lead to two.

Penn State’s Lamar Stevens had two free throws up 73-71 to ice the game with 3.8 seconds left.  The 71.9% foul shooter missed the first one short, and the second came off the rim to the right where Trayce Jackson-Davis grabbed it, passed to Green and hoped the mercurial Green could bring some Hoosier magic to an event where it has been absent for its first 22 years.

Green took two dribbles up the left sideline, and lofted a high arching shot from the half-court stripe.  The hysterical crowd went eerily silent as the ball reached its apex and descended toward the rim.  As it sliced through the net, teammates mobbed Green and the crowd roared.

Boroski and his fellow officials reviewed the shot to make sure it left Green’s hand before the clock clicked to 0.0, but the crowd knew it was good without the need for replay.

As the Hoosiers gathered themselves and ended their group celebration, Green was left alone, sobbing at the spot from which he launched what will be remembered forever as his signature moment.  As he gathered himself, Green saluted the crowd and looked to the ceiling as he ran from the court.

After the game, Miller sat down with me exclusively to discuss his team’s miraculous comeback, “I knew we needed an emotional reset, Kent, and so I went after Bo.  I hoped my lack of profanity would keep him from teeing me up.  I mean, who screams ramparts?  Saw that in Caddyshack when the reverend missed the putt to set the course record, and thought it was funny.  Guess Bo didn’t.”

When I asked what Miller did in the locker room after his ejection, his answer was surprising.  “I decided not to watch on TV.  I actually hate watching games on TV.  I mean, that’s all we do is watch film, right?  So I dropped to my knees and prayed the team would find the strength to play their best basketball.

“I was so immersed in prayer I never heard the crowd.  I wasn’t sure what happened until the guys stormed the locker room screaming.  Even then, I thought it might be a prank.  You know, like that show with the idiot who played Kelso on That 70s Show!  Glad it wasn’t!”

So the Hoosiers, back from the brink of elimination and a nervous Selection Sunday, will stay in Indy with their NCAA ticket punched for at least another day as Maryland awaits.