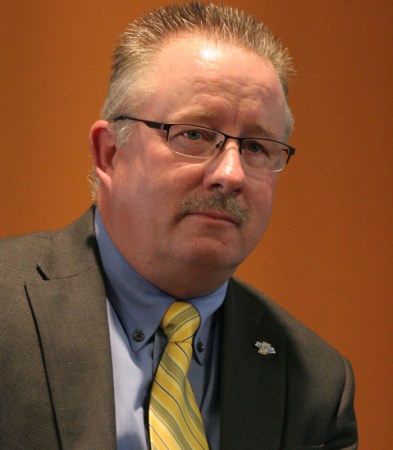 Assuming IHSAA Commissioner Bobby Cox is putting basketball players in harm’s way is unfair to Cox and the IHSAA.

Virtually every sporting organization in America canceled or suspended their indoor activities during the last 24 hours, but the Indiana High School Athletic Association announced they will play the state basketball tournament as scheduled.

To lessen the chances of spreading the Coronavirus, only family members will be allowed to watch the games in person.

This bothered many people who believe playing regional games Saturday unnecessarily heightens the risk of athletes and coaches contracting the disease, and they are highly critical of the decision.

I received several texts and DMs today from friends and colleagues who are hot about IHSAA Commissioner Bobby Cox’s decision to play tournament games as scheduled, “Can’t the moron see what the NBA and NCAA are doing?  What’s so precious about the state tournament that it should be played while the others aren’t?”

Fair questions aggressively stated, and it’s reasonable to assume Cox and other IHSAA officials asked kinder and gentler versions of physicians, epidemiologists, and public health experts.  What if the answers came back, “We believe the risk is virtually nonexistent for athletes and staff because travel is very limited within a specific geographic region, fans are kept to a bare minimum, and no overnight stays are required.  Playing in this tournament is actually less dangerous than going to church or the grocery store.  There is no reason to cancel these games – other than to placate a terrified public.”

I’m not saying that’s a verbatim composite of comments from the experts in the field of infectious diseases who were consulted, but it can be assumed Cox was given no reason from smart people who study these situations for a living for cancelling, or he would have made the very easy and popular decision to pull the plug.

Cox may still revisit the issue and cancel, but it won’t be the result of protests from laymen who believe they understand how the Coronavirus spreads because they watched an anchor on Fox News or CNN explain it.  He will listen to people who actually know what they are talking about, and adjust accordingly.

If athletes and coaches are said by experts to be safer not playing, we can assume Cox will act on that guidance.

People in media need to understand they are not all-knowing because they have access to a microphone.  The ability to make loud and widely heard noises does not confer omnipotence upon them

Leave keeping us safe to the experts.