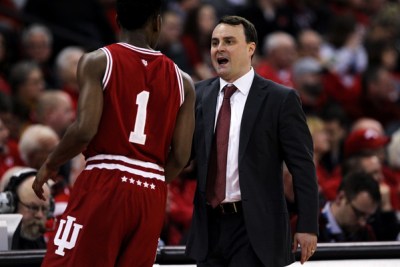 “The Lord guided me.  No other way to explain it,” said Al Durham after pouring in a career high 37 points to lead Indiana to an improbable 91-66  runaway win over #3 seed Maryland.

Durham’s previous career high was 22 points against St. Francis (PA) in last year’s NIT.  Against Maryland, Durham quite literally could not miss, hitting 10 of 10 from behind the arc, his only two two-pointers, and all three free throws.

Durham’s most amazing basket was neither a three-pointer nor dunk, it was the outback of a 28-foot airball launched with just three seconds of the shot clock gone by Devonte Green.  Durham sprinted through the Maryland defenders, soared to meet the ball as it fell short of the rim by two feet, and flipped it over his head into the basket.  As Green passed the scorer’s table, he asked to be awarded an assist.  The official scorer laughed as he complied.

As happy as this performance out of nowhere made everyone associated with Indiana Basketball, it bothered Maryland coach Mark Turgeon just as much, “I kept telling our guys to play off Durham because nobody makes every shot, right?  That kid might not make another shot in his life after tonight.

“I wouldn’t change a thing.  Durham is just not a guy I believe can beat us.  Even after watching him do it, I still don’t believe he was able to do it.  I would do it again, and again, and again.  If Durham wasn’t graduating, I promise you next year you would not see a Maryland defender within 10-feet of Durham,” Turgeon added.

When I reminded Turgeon that Durham is only junior, he broke his dry erase board over his chair and stormed into the locker room.

Indiana coach Archie Miller was just as surprised, but happily so, “I kept telling Al to stop shooting.  When he was five for five shooting threes, I demanded he stop shooting.  I mean, what are the odds of a 38% shooter making a sixth in a row.  When he hit it, I told Armaan to get him, and Armaan shook his head no.  I’m glad he did.

“Who’s going to do it for us against Purdue – Cooper Bybee?” Miller said with a laugh in our nightly exclusive conversation over a rib eye and beer at Prime 47.  That he has decided to speak only to me after every game rather than talk to the rest of the media that covers IU hoops is a source of discontent for them, but I appreciate the access.

Junior Joey Brunk was also singled out for praise by Miller as he devoured his steak cooked rare and his Pabst Blue Ribbon draft, “Brunk was stout.  His six blocks were key.  (Jalen) Smith knew after Brunk blocked his first two shots, it was over for him.”

“We’re still in it!  Ain’t gonna argue with perfect!” yelled De’Ron Davis has he embraced Durham in the locker room.

Maryland’s seed will fall a bit after the loss, but as long as senior Anthony Cowan, Jr., is ambulatory, the Terps will be a tough out in March.

As for Indiana’s March Madness hopes, their NET ranking bounced up to #42 and #24 in Ken Pom.  Even Joe Lunardi has adjusted Indiana’s seed to the seven line.

The semifinal matchup against Purdue will both give IU a chance at redemption against a Boilermakers team that beat them badly twice, and allow the Hoosiers a chance to eliminate their cross state rival from a spot in the NCAA Tournament.  After Purdue beat Michigan State 61-60 because of a lack game Tom Izzo technical, Lunardi and fellow bracketologists Jerry Palm and Mike DeCourcy moved them into the first four out slot.

The winner of Indiana and Purdue will take on the winner of the other semifinal between surprise qualifier Michigan and the Fighting Brad Underwoods of Illinois.

Should be a spectacular Saturday night in the Circle City – the rightful home of college basketball’s premier conference tournament.