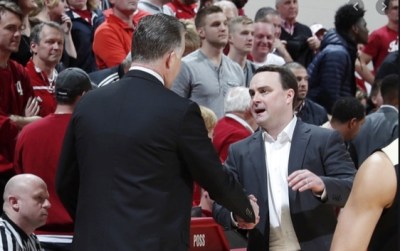 The postgame handshake between Matt Painter and Archie Miller was much friendlier than their earlier meeting at mid-court.

A simple basketball game became a showcase for the wisdom and old-school parenting from an 83-year-old mentor 15 years removed from coaching his final game.

“I just wanted to get those two guys focused on their kids.  We can’t have Big 10 coaches squaring off like Ali and Frazier in front of 18,000 people.  Someone had to do something, so I did,” former Purdue coach Gene Keady told me after Indiana beat Purdue 63-57 in the Big 10 Tournament semifinals – a game in which the once heated rivalry between these two programs nearly went nuclear.

In the most surreal scene in the 23-year history of the Big 10 Tournament, Miller stood in front of the scorer’s table chin to chest with his significantly larger counterpart.  Miller barked, his face going a deeper hue of red with every word, while Painter grinned and bodied Miller back toward the IU bench with a series of tiny steps before being separated by referee Terry Wymer.

Just a minute prior, Indiana led Purdue 23-22 in a fairly pedestrian game between teams that finished the regular season 10th and 11th in the standings.  Then all hell broke loose.

As Indiana’s Al Durham drove to the basket, Boilermakers guard Nojel Eastern rolled to help and knocked Durham to the ground.  Eastern smirked as Durham made his case to Wymer that a flagrant foul should be called.  Race Thompson didn’t care much for Eastern’s smirk and shoved him.  Trevian Williams objected strongly to that shove ands ran at Thompson.  From there, the court devolved into pods of minor skirmishes.

Guys in suits – coaches, trainers, managers, and others – stood as human barriers to keep bench players off the court.  Five wrestling matches continued as three referees worked to restore order.  I saw one punch thrown, but the refs didn’t, and so who am I to tattle on the young man.

Painter and Miller ran on to the court as fans cheered and booed with equal enthusiasm depending upon who they were cheering for and which fracas their eyes were trained on.  As the squads returned to their benches, the coaches converged upon the three officials at the scorer’s table.  There was screaming and hollering by all five, and none was audible despite my position only 15-feet away.

The refs turned to the monitor to figure out what calls needed to be made against which Hoosiers and Boilermakers, and Miller and Painter were left with only each other to talk to.  It started quietly, almost like a relaxed conversation between two peers.  Then, Painter dismissively waved Miller away with the back of his hand, like he was shooing away a mosquito.

Miller’s countenance changed.  What once seemed like friendly banter became contentious enough to draw the attention of Indiana and Purdue fans who cheered with vigor for their coach.  That’s when Painter walked Miller back toward his bench – until Miller had enough.

Braced against his back foot, Miller refused to move further, and Painter turned his head and gritted his teeth.

In this case, the third party who brought calm to what could have been a disastrous storm was   Keady, who looks spry enough that he might be favored to take either Painter or Miller.  Keady yelled loudly enough at the coaches that he could be heard over the suddenly quiet crowd, “Hey, goddammit!  Shut up and sit the hell down.  What the hell are you doing?  Coach your teams!  This game is too special for this kind of bullshit!  Sit down!  Jesus Christ, I hated that prick Knight, and he hated me, but we damn sure never fought each other!  Sit….down!”

As Miller and Painter went their separate ways, the crowd, IU and Purdue fans alike, rose to applaud Keady as he scowled and then walked briskly back to his seat.  He looked one part pleased and four parts embarrassed as he took his seat behind the Purdue bench.  He gave a little wave which looked bigger on the Jumbotron – which brought another wave of cheers.

Technicals were assessed in equal numbers against both Indiana and Purdue, and so no free throws were shot.  None of the squabbles resulted in a disqualification for fighting, and so the game continued with neither the Hoosiers or Boilermakers gaining an advantage.

In game action, freshman Trayce Jackson-Davis was stellar with 22 points and 15 rebounds.  His ability to limit Purdue second chance points was critical to Indiana getting the win.

I could go on about the basketball, but no one is going to be talking about dribbling, passing, and shooting tomorrow.  The talk will be about a great coach who everyone thought was finished teaching lessons on the basketball court.

In the first game, Illinois beat Michigan in a comparatively dull contest, so Indiana will take on the Fighting Illini tomorrow at 3:30 p.m.

It will take some doing for the Hoosiers and Illinois to trump today’s drama.