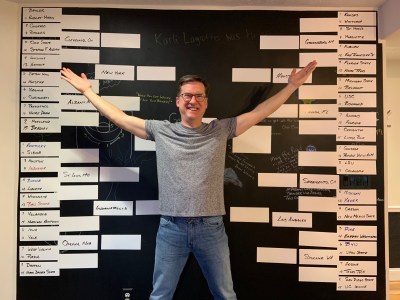 The MMFAA Great Wall of Hoop is up and the bracket has five Indiana teams in it.  Indiana vs. Houston is among intriguing first round matchups.

The Hoosiers narrowly missed their first ever Big 10 Tournament Championship this afternoon, losing 67-66 – the exact same score as the game Indiana lost at Champaign-Urbana two weeks ago.

Indiana came out flat, still feeling the emotional hangover following last night’s incredible and strange win over Purdue.  Illinois ran out to an 18-4 lead before a barrage of threes from Devonte Green gave the Hoosiers a 22-21 lead at the under-12 media timeout in the first half.

For the rest of the game, Indiana struggled to make its legs work at the same level Illinois’ did. This was IU’s fifth game in five days, while the Illini were playing their third in three.  In one strange moment, new Big 10 Commissioner Kevin Warren banished the Indiana Pep Band.  “I just couldn’t take it.  if I had to endure Indiana, our Indiana or the William Tell Overture one more time, I would have yanked my own ears off,” he explained.

IU fans filled in for the band, singing the fight song and humming the overture during timeouts.

For the first time since the tournament opening win over Nebraska, Archie Miller spoke to the entire media contingent following the loss, and again he went after ESPN bracketologist Joe Lunardi, “Mr. McFeely needs to go back to Mister Rogers Neighborhood and stop yakking about brackets.  If he wants to talk seeds, he should be a farmer!  That would be a great idea – go plant something and grow some sense – like frankincense!  Ha!”

Miller’s mood an hour later brightened when I told him by phone that his Hoosiers would be a nine-seed and play Houston in St. Louis, “I love beating cheaters.  Can’t wait to hammer Sampson.  Never cared for him.  Good coach.  Arrogant though.  We’ll use that arrogance against him!  Can’t wait!”

The next step in the bracket won’t be as much fun for Miller as the Hoosiers drew Kentucky as a likely second round opponent should IU beat Houston and Kentucky beats 16th seeded Siena, “I don’t look ahead, but Calipari is a family friend.  I know our fans hate Kentucky, and Kentuckians hate IU, but the Millers and Caliparis have known each other a long time.  That doesn’t mean we won’t kick his ass, like Indiana always seems to.  We match up great with UK!”

Indiana got into the tournament by playing its best basketball after beating Nebraska in Wednesday’s first round game.  Everything seemed to click after that until running out of gas today.

This was a very good day for many other Indiana teams.

Results of first round games will be revealed on tomorrow’s Dan Dakich Show on 107.5 FM The Fan in Indianapolis.