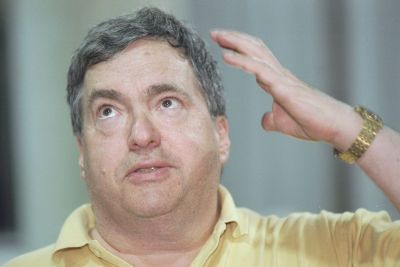 “It suddenly occurred to me that I don’t have to take this unending torrent of crap from this guy, and if he hits me back – so be it!” said Bulls GM Jerry Krause.

This is a story depicting an event that never happened in 1995 but should have:

Both general manager Jerry Krause and Michael Jordan confirmed rumors of a one-sided and bizarre physical confrontation between the portly executive and the three-time MVP.

“I had enough from Michael, so I swung,” the physically unimposing Krause told the media today.  “Michael is the best basketball player in the world, but I’m not going to allow anyone to belittle me.  Come at me, I’m going to answer.  I’m done being called ‘Crumbs.'”

Jordan smiled as he recounted the event and what prompted it, “Hey, I respect Jerry for what he did.  I sure as hell wouldn’t have taken the crap I’ve given him all these years.  Calling him ‘Crumbs’ was over the line, but if a man isn’t going to show me where the line is – of course I’m going to wind up crossing it.  Hell, I lived on the other side of that line for a long time, but now I know where it is.”

Phil Jackson refused to play favorites when he answered questions about the incident, “We’re a family, and Jerry is a part of the family.  Families fight once in a while, and Jerry had all he could take.  Let’s be honest, Michael isn’t going to miss any time because of a punch from Jerry,” Jackson said.  “Michael goes up against the biggest and best athletes in the world every time he plays.  Jerry was just sticking up for himself in the best way he knew, but Michael is going to be OK.

“This is ultimately a good thing.  The taunting was getting out of hand,” Jackson said.  “Jerry is atypical looking from an athletic perspective, but he’s still a human being who deserves respect, and he asserted that standing yesterday.”

It’s well known that Krause has been a bit of a punching bag for verbals taunts from Jordan and teammate Scottie Pippen for years.

“I took it for a long time because they are athletes and I am an executive for the team,” Krause explained.  “It’s not my place to deal with the players as professional peers because we operate in different worlds. But as a man, I am a peer, and there is an amount of s**t I simply won’t eat.”

The Bulls play the Pacers tomorrow night at the United Center, and Jordan is expected to be in the lineup.  “Yeah, I’ll play.  Laimbeer and Dennis did worse to me for years.  Dennis and I are teammates now working toward the goal of winning more championships – as are Jerry and me.  Families fight.  It’s cool.  Nice short right though!”

Jordan rejected the notion that he considered retaliation, “I deserved it, and to be honest, I kind of hoped this day would come.  Even at the second he hit me, I kind of thought, ‘Good for you, Jerry.’  Maybe I was a little stunned he hit me, but it didn’t make me mad – not even a little bit.  I respect a guy who says he’s had enough crap thrown at him.”

As a result of the fracas, Krause was no longer taunted by Jordan and Pippen, and Krause’s insecurities were less an issue.  The relationship between Jackson and Krause improved, and so pressure applied by Krause to owner Jerry Reinsdorf about replaced Jackson abated.

The Bulls won the next three championships as they did in reality, and then they won another in 1999 as Michael Jordan enjoyed one final valedictory swing through the league.  Pippen stayed with the Bulls through his retirement as Krause never threatened to trade him and signed him to an extension after the 1997 championship.  Jackson also stayed with the Bulls, depriving the Lakers of one of the best coaches in NBA history.

As a result, the Pacers won the 2000 championship in a less than thrilling sweep of the Utah Jazz.

Of course, none of this came to pass.  Krause never hit anyone.  He wasn’t wired to answer bullying with physical force.  He was an able administrator who built rosters around Michael Jordan.  He is simultaneously and justifiably underrated and overrated as an executive who won six championships with the greatest player in the history of the game – a player he inherited.