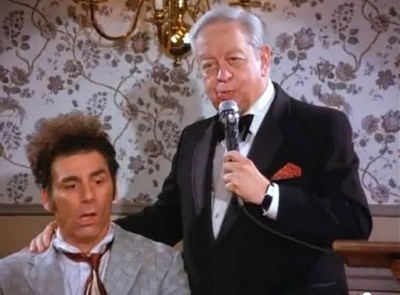 People under 60 remember Mel Torme from his appearance on Seinfeld.  I remember him as a nice guy who was on “Seinfeld.”

My dad didn’t like a lot of people, and he always seemed to find a reason to dislike or mock celebrities other than Don Rickles.  He seemed to like Jackie Gleason and Richard Pryor too, but the list of entertainers, authors, or newspeople he tolerated was very short.

When I worked as an intern at WGN Radio in Chicago, my goal was to get autographs for Dad from every celebrity he disliked who visited our studios.  As long as Gleason, Pryor, or Rickles didn’t walk through the door, that meant just about everyone.

Roy Leonard did middays at WGN then, and he had a great reputation as one of the best interviewers of celebrities in media, so in-studio visits from famous people occurred often.

The policy at the station was pretty straight forward – if you wanted an autograph, ask Roy’s secretary, a friendly fellow named Michael Jordan.  He was Chicago’s second most famous guy with that name, and he was very accommodating.

One morning, I found out jazz singer and Chicago native Mel Torme would be visiting Roy.  Not surprisingly, Dad did not like Torme.  Any time he showed up on TV, Dad entertained us by blasting Torme for a variety of things – especially his predisposition to wearing tuxedos or ascots.  Then he turned the channel.

I asked Michael if he could get Torme to sign a headshot or index card “To Clark.”  Michael said that Torme was always happy to sign and he would be happy to make the ask.

Back in the sports office, I went to work doing the things that interns do – lining up interviews, writing sportscasts, and planning that weekend’s Bears pregame.  I was on the phone with my back to the sports office door when I felt a tap on my shoulder blade.  The call was important, so I held up my finger toward the source of the tap as I continued my conversation.

There was another tap.  This time, I waved dismissively toward the person who had the temerity to interrupt my work.  Another tap on the shoulder quickly followed, and I ended the call and spun to face this brazen interloper.

It was a smiling Mel Torme, “I am so sorry to interrupt your call, but I wanted to get the name of the person for whom I’m signing correct.  Is it C-l-a-r-k?”

I told Torme he had it right, and then apologized profusely.  The sports office was usually empty in the morning – other than fellow interns.  I assumed it was either Mitch or Christine – not Mel Torme.  Had I known it was Mel Torme, I would have been far more polite from the jump.

I felt especially bad because the autographed picture would not be a prized keepsake for an admirer, but an unwanted and confusing parcel for a man who disliked him.  I wanted to turn back the clock and un-ask Michael to get Torme to sign.

Dad got the picture and was likely very confused.  I don’t remember any acknowledgement of the picture after he received it.  I would get other autographs through my time at WGN, but never met anyone as gracious and tolerant as Mel Torme.