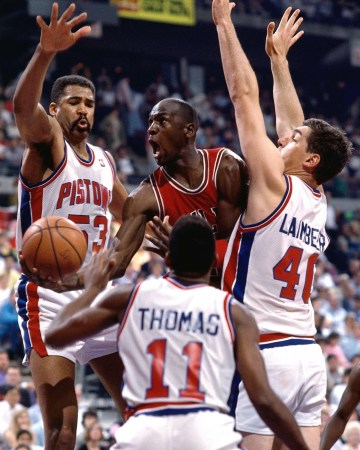 Millions watch The Last Dance because the Michael Jordan and the Bulls played basketball the hard way 30 years ago.

Postgame handshake lines are moronic and theatrical exercises for fans who want to believe the results of games aren’t important enough to make or ruin anyone’s day.  Fans just can’t embrace the idea that basketball opponents dislike one another as they compete – or after.

So when the Bad Boy Detroit Pistons failed to congratulate Michael Jordan and the Bulls for finally eliminating them from the playoffs in their fourth attempt, fans felt they were poor sports.  In the moment, I had no idea why anyone cared.  The Pistons lost as they won – without apology or class.

The Pistons were not nice people.  Bill Laimbeer was the head thug, Isiah Thomas was willing to do whatever it took to win, and Dennis Rodman seemed insane.  Getting swept by the same team whose asses they had kicked the previous three years was too much for them to bear, so the Pistons left the court with 7.9 seconds left in the final game.

As a Chicagoan, I loved it.  Not only had the Bulls humiliated the defending champs, they broke their spirit.  The Pistons hadn’t just lost a series; the Bulls took their will.  Hard feelings over the lack of a handshake?  Not for Bulls fans.

The Bulls went on to win six straight NBA Championships when Jordan played a full season, and they have their hatred for the Pistons to thank for it.  Without getting knocked down again and again by Laimbeer, Mahorn, and company, the Jordan and the Bulls would never have embraced the weight work needed to reach their potential.

Then because of the Bad Boys, NBA rules changed.  Today, hard fouls draw fines and suspensions.  Those rule changes have all but cleansed professional basketball of the rough play that aggravated fans.

The unintended consequence of penalizing players for committing hard fouls is that the NBA has become a lovefest.  People watching ESPN’s The Last Dance are seeing basketball played differently.

Professional basketball has become a genteel game played by gentlemen, and so we are left to watch The Last Dance for a taste of hard edged hooping between teams who didn’t like each other – and still don’t.

There is nothing like genuine dislike to make sports interesting.  The NBA keeps growing and growing, so it’s hard to be overly critical of a style of play where players are allowed access to the rim without being knocked senseless, but it was memorable and fun enough back in the day that The Last Dance commands our attention like few shows in ESPN history.

Dislike makes basketball – or any sport – more fun to watch once we get past our immediate repulsion.  Conflict equals drama, and we like drama.  The thrill of victory, and the agony of defeat – remember that?  There is no motivator like agony and no reward like victory.

The Last Dance is a love letter to an era of basketball when winning meant everything.  Instead of today’s quest for branding and popularity, basketball the way the Bulls and Bad Boys played it was about beating an opponent – whatever that took.

I miss those Bulls teams I loved and admired, and I also miss those Bad Boys I admired and hated.  Mostly I miss basketball played in a way that I don’t have to guess whether teams crave winning above all else.