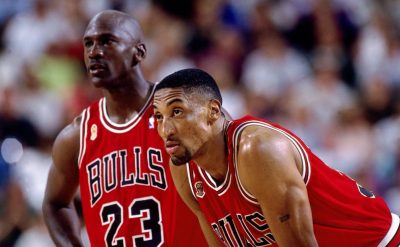 There is a rule in drama that for every hero, there must be a villain.  That’s just the way it is, and no one messes with that construct if they want to sell tickets or get great ratings.

The Last Dance has followed that rule through all eight episodes we have seen so far.  Michael Jordan is – obviously – the hero.  He’s the warrior, the indomitable force, the leader who drags the rest of the roster kicking, screaming, and punching to magnificence.  Jordan is manly, indifferent to pain, and is shown as Ruthian, right down to the cigar.

So the producers needed a villain.  Steve Kerr, who punched Jordan in practice, is a candidate. But who would believe Kerr as a villain?  Horace Grant showed villainous promise as the guy Jordan believes leaked inside the locker room drama to Sam Smith, the author of The Jordan Rules, but he wasn’t with the Bulls during the season the documentary is supposedly built to chronicle.  Toni Kukoc is foreign, which is a solid trait for a bad guy, but he seems a relentlessly nice man.  Dennis Rodman is more comic relief than true outlaw.

That leaves Scottie Pippen, the gifted Robin to Jordan’s Batman, to fill the role as the contrast to Jordan’s manly greatness.  Enough good is said about Pippen, the ultimate NBA wingman, that the producers can sleep at night, but his overall contribution to this documentary is to provide Jordan yet another obstacle to overcome.

The migraine against the Pistons was the first affront to Jordan’s quest for a championship and stands in stark contrast to Jordan’s flu game against the Jazz in 1997.  Pippen struggled through his headache for 42 minutes in the game seven loss in Detroit, hitting one one of his 10 shots.  When Jordan had the flu during game five of the 1997 NBA Finals – or food poisoning, depending on the story you believe – he overcame it to score 38 points in the Bulls two point win.

Then in 1994 as Jordan played baseball, Pippen failed to lead as Jordan would have by balking at being the in-bounder on an out of bounds play designed for Kukoc with 1.8 seconds left in a pivotal game three.  The Bulls were tied with the Knicks and needed a win to avoid falling in a 3-0 series hole.  Pete Myers reported for the intractable and moody Pippen, Kukoc hit the shot, and the Bulls eventually lost the series in seven games.

Pippen then executed what amounted to a health related hold out in the season The Last Dance chronicles.  Unhappy with his contract, Pippen decided not to screw up his offseason by enduring needed foot surgery until the season was nearly ready to begin.  He missed the first 35 games, and Jordan said Pippen’s behavior was “selfish” in an earlier episode.

Jordan is shown soldiering on as the Bulls leader without Pippen.  The Bulls were in first place in the East with a 24-11 record in the games Pippen missed.

Those three chapters in Bulls history are factual, and they were depicted accurately in the documentary.  Nothing has been false through eight episodes, but the narrative is overtly pro-Jordan and Pippen’s reputation has been sacrificed to lift Jordan’s heroism to Herculean levels.

Displaying Jordan as the gallant and self-sacrificing warrior is driving viewership to level a pro-Pippen film could never reach.  Let’s face it, curiosity about Pippen will never drive interest in anything.  Making him a carbancle serves its dramatic purpose, and if Pippen is damaged, who really cares about Pippen anyway.  After all, when was the last time a kid saved up for a pair of Air Pippens?

Jordan describes himself as a guy who “wins at all costs.”  That compulsion clearly didn’t end when he hung up his Nikes.  The winner in The Last Dance is Jordan by a large margin.

Did anyone believe it would be otherwise?