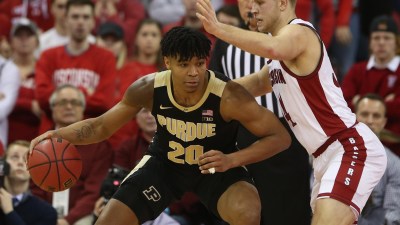 Nojel Eastern said goodbye to West Lafayette – and to his opportunity to embrace important life lessons.

Nojel Eastern decided to transfer from Purdue.  He communicated that decision on Tuesday.  Yesterday (Thursday) it was revealed that he will play for Michigan.  This morning on “Breakfast with Kent,” I mocked Eastern’s shooting, saying “If Juwan Howard promised Eastern a green light to shoot, I hope he uses it liberally when Michigan plays Purdue and Indiana.”

Maybe it’s a little bit petty to rag on the almost 21-year-old who is a victim of equal parts bad judgment and wrongheaded counsel.  The kid is just trying to live his dream, after all.  But I’m done patting a kid on the ass for screwing up.  Giving kids a pass for dopey decision-making has landed us where we are in college sports.

Some of the kids who are told the NBA is not in their future transfer in order to change their circumstances, and others fight through the adversity to improve.  Almost none find their way onto an NBA roster.

Eastern is one of those guys who has either decided on his own or been encouraged to bounce to a program where his talents will be respected and nurtured.  Whether that encouragement came from his parents, potential agent, or Howard, is unimportant.  What matters is that quitting is a hard habit to break.

In response to a kid transferring, I used to say or write things like “to each their own” and “we wish him the best.”  I’m done with that glad-handing crap.  Granted, we learn from our own mistakes.  Hell, I wrote a book about mine!  But it’s time to share perspectives we have gathered over a lifetime of experience to point out the idiocy of a decision like Eastern’s, and if that means appearing mildly petty for lobbing a barb at him – that’s a small price to pay.

College students don’t like to be referred to as “kids,” so let’s welcome them into adulthood by holding them accountable for their ignorance.

Eastern cannot shoot the basketball – from the foul line, three-point arc, or anywhere in between.  That disqualifies him as a potential NBA player.  The correction for poor shooting is tireless work alone in a gym.  Purdue’s gyms are outfitted with 10 foot rims and wooden floors just as they are at Michigan.  If Eastern believes relocation is going to be the magic elixir to basketballs falling through the hoop at a higher rate, he’s mistaken.

The time has come for more raw truth and less pablum in dealing with kids.  They need honesty whether they are willing to accept it or not.

Playing in the NBA is a result for a precious few with rare combination of athletic ability, health, and work ethic.  Hope is not one of the qualities that get you there.  Everyone hopes to play in the NBA.

I hoped to play short for the Chicago Cubs.  Guess what happened.

I’ll tell you what playing in the NBA is not – a life’s work.  It’s what 450 people at a time each year get to do; it’s not who those 450 people are.  Eastern had a chance to grit his teeth and fight for his dream.  Instead, he chose to flee to Ann Arbor.

The lessons he would have learned through sticking it out as a Boilermaker would have served him for a lifetime.  It would have been a great example for his children – and their children.  Instead, he bailed because hope resonates with him more than grinding does.

The grass is rarely greener on the other side of the fence and the rims will never be wider in Ann Arbor.

If Eastern couldn’t grow up in West Lafayette, I hope wisdom comes to him at Michigan.  If a little mockery helps shine a light, then I’ll take my shot.