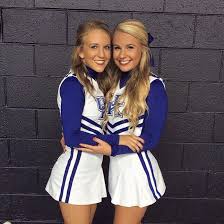 “Nude, lewd, and drunk” might be printed on Kentucky’s state motto, but that’s no way to go through life, kids.  Adults who encouraged that behavior at the University of Kentucky were fired today.

A three-month university investigation revealed “…coaches failed to stop a culture of hazing, alcohol use and public nudity at off-campus activities where they were present,” said Eric N. Monday, UK’s executive vice president for finance and administration.

For a better idea of what happened, watch this video, add Everclear and obscene chants, and remove clothing:

Jobs can never be perfect enough for some people.  Earning a boatload of cash for coaching college cheerleaders was insufficient for Jomo Thompson and his staff.  No, they had to encourage or allow drinking and nudity during a team retreat at Lake Cumberland.

Like Seinfeld character George Costanza, who flew to close to the sun on wings of pastrami as he combined carnal activity with eating sandwiches, the Kentucky cheerleading coaches wandered beyond acceptable behavior as they watched their athletes perform gymnastics while inebriated and bottomless or topless.

Adults who fail to adhere to the “Creepy Rule” will always find their way to unemployment.  The “Creepy Rule” – for those who are unaware – states “if you engage in behavior that you would judge as creepy if you witnessed another person engage in it, you have become a creep yourself.”

There are benchmarks in life that must be honored.  College students should not socialize with high school students, and adults should never socialize as peers with college students.  This is especially true for university employees.

That lesson should not need to be reinforced through employer action, but evidently it did at UK.