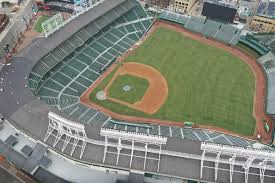 Can baseball’s owners and players show an appreciation for fans rather than embrace their inner-greed while stadiums are empty?

Nothing like billionaires arguing with millionaires to reveal how little any of them have in common with the rabble responsible for their wealth.

We pay for tickets, buy beer and hotdogs, watch on TV, wear jerseys, and turn our kids into like-minded zealots for our favorite teams.  We are the straw that stirs baseball’s economic drink, and most of the time we don’t mind being played for saps.

And then the players and owners, who normally smile as they coexist as co-conspirators in this lucrative and preposterous eco-system, get greedy and reveal themselves as mercenaries.  They bicker over how their spoils should be divided as fans wonder just what the hell baseball means to them anyway.

There’s nothing like a crisis to confess the character of men, and Coronavirus has brought a scenario where Major League Baseball has been forced to suspend operations while trying to find a way to re-boot the season as a media-only enterprise without fans in in America’s ballparks.

A lack of gate has required owners to propose a severe reduction in salaries of players – some at the top of the food chain (Mike Trout, Bryce Harper, and others who make more than $20M per year) are being asked to take an 80% haircut from what they would have earned during a normal season.  As you might imagine, no one is happy about that level of pay reduction, but Trout would still earn almost $6M for playing an 82-game season.

While Trout and other players might chafe at losing out on up to $31M, and owners lack enthusiasm for digging into their own pockets to pay more, fans who consider themselves fortunate to have a job paying less than 1% of Trout’s reconfigured pay ($57,000) have little patience for either side.

This is nothing new.  Fans have complained about players and owners being tone deaf about financial concerns for decades.  I remember a conversation I had with a Chicago radio news anchor in 1990 about baseball salaries.  Chris was a huge baseball fan, but was done with the game because free agents at the top of the market had the temerity to demand over two-million per year.

That was 30 years ago and the amount of cash was roughly 1/18th of what Trout is under contract to receive as the best player in the game.  Still, attendance in 2019 held mostly steady, declining slightly from 69.7 million in 2018 to 68.5 million.  Whether people will continue to buy tickets to watch baseball and spend a significant chunk of cash on overpriced concessions in 2021 will be determined by how MLB comports itself during this challenging time.

When a vaccine or herd immunity renders our lives somewhat normal again, will we forget and forgive the piggish players and miserly owners for their suddenly transparent avarice?

Maybe the optics of a group of men who play a game for absurd amounts of cash during a time of 15-17% unemployment leaves a residue that turns fans toward less frivolous pursuits.

I don’t believe our society is capable of bringing about that sort of severe reckoning for a game that has been suckling at fans’ teats in exchange for a viewing experience that has become too long and tedious to be enjoyed.

The popularity of the NFL and NBA seem to be inured against fan angst, but the MLB needs to be very careful to avoid a tipping point where fans finally decide enough is enough.  Challenges presented by Coronavirus if answered by greedy posturing might push enough fans away from baseball to cause a much deserved reboot of priorities for both owners and players.

Owners and players have enjoyed tremendous popularity and wealth, but fans’ dollars are not a birthright.  They need to be earned both in times of prosperity and hardship.  Any fool can win when the sun shines.  Let’s see how much baseball cares about fans as this storm distracts them.

2 thoughts on “Will money finally doom baseball’s popularity – or can owners and players rise about greed?”