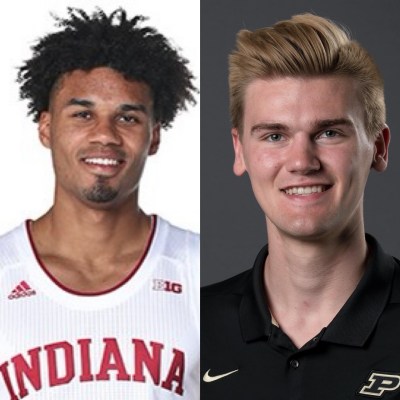 Justin Smith and Matt Haarms have decided to seek glory elsewhere rather than realize life is about others, not their individual glory.

The question of allowing graduate  transfers to compete without loss of eligibility is very complicated because transferring is rarely beneficial for a student-athlete or his sport.

Our childhoods are about dreams – what we aspire to be.  Adolescence teaches us what we cannot become and how we need to adjust our sites toward what we can accomplish.  Adulthood makes it clear our best work is devoted to helping others become functional adults who are willing to help others.

All kids with a modicum of athletic talent dream of becoming a quarterback, small forward, midfielder, or shortstop for their favorite team.  At some point, it dawns upon us that desire and willingness to work takes us only so far.  For many, it happens in middle school.  For others, it takes a little longer.

As we look at the growing numbers of college basketball transfers, it seems as though they are hanging on to their dreams a little bit longer than reality suggests they should.  They flee adversity and embrace another voice that allows them to kick their NBA, NFL, MLB, and MLS aspirations down the road just a little bit longer.

They cheat themselves of that glorious moment when participating in sports becomes about helping the group succeed rather than the momentary joy of individual accomplishment.

There is no question it’s better for student-athletes to stick it out – to answer adversity with grit and tenacity instead of packing a bag and changing addresses.  Quitting becomes habitual, and transferring is a resignation.

So if it’s better for the student-athlete to stick it out and it’s better for the game for them to remain at one place for four years, why does the NCAA continue to allow graduates to leave their school to play somewhere else with immediate eligibility?

The answer is complicated.

Sometimes wisdom needs to come hard to those who refuse to accept it when it’s served easy.  It’s not up to the NCAA or anyone else to legislate against mistakes that serve as the best teachers.  Freedom to screw up is really what college is all about, and the NCAA gives student-athletes the freedom to screw up big, wind up struggling with the same issues at a different school, and learn the issue wasn’t a school or coach.  It was the guy staring back at him in the mirror.

The NCAA even considered allowing undergraduate student-athletes to transfer without sitting for a year.  That plan was correctly tabled because the disruption to college sports and its players would have been too severe.  We love mistakes, but mandating a degree before gaining the freedom to wander without penalty is the right answer.

Some college athletes love to hear praise.  They covet the guidance from those who make it easy physically and emotionally.  Others want challenges from coaches.  They feed off the input of those they can prove wrong.  Guess which of those two types of athletes succeed in sports and life at a higher level.  Guess which transfer more often.

Competing as a college athlete is difficult.  It requires a willingness to work exceptionally hard without any promise of an immediate return on that investment.  In that way, it mirrors life.  The concept of fairness does not exist in college sports or business.  It works out for some and doesn’t for others until we realize the true measure of a life is not the money earned, house or car owned, or titles won.  It’s about the impact you have upon others whose lives are enriched by your efforts.

It’s a rare individual who shows up on campus buying into the concept of giving, but many graduate with that wisdom.  That’s the value of college sports for those smart enough to embrace it.

Transferring has yet to help anyone gain that insight, and that’s why it should be rejected as a concept by those who are tempted to take flight instead of fight.  But removing the option to transfer as a graduate would do nothing to engrain that lesson.

That’s why transferring should remain legal but rarely utilized.