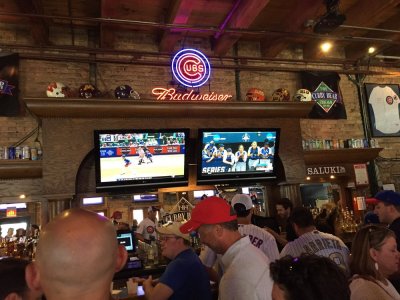 The answer to baseball’s current state of idiocy might just be across the street from Wrigley Field’s gates.

Billionaires care most about money.  That’s why they are billionaires.  Major League Baseball franchise owners are billionaires, so why does it surprise anyone that they are united it their refusal to pony up $20 million each to get players back on the field?

The discord between owners and the players union is easy to explain.  Each side wants more money, and neither is willing to sit across from each other and give ground.  The logic is shortsighted, but very simple.

Owners continue to propose the same percentage of revenue they expect to collect and vary the number of games.  The players, not being idiots, understand the owners’ game and want salaries prorated at a level agreed to during negotiations that took place in March.  Owners say they can’t afford it, and players ask for proof of poverty.  Owners present a redacted financial statement, and the players don’t buy it.

Both sides have enough money to wait out the other through this unprecedented summer, and the owners have commissioner Rob Manfred in their very comfortable pockets.  He has the power to mandate players go back to work for a 48-game season at the rate the players agreed to.  That’s the hammer that owners will rely on to start the season and get to the lucrative expanded playoffs.

The fallout will be two-fold – already disenfranchised fans are being beaten over the head with a bat of indifference.  The bruises from this pummeling will be slow to heel.  And, the entrenched distrust between owners and the players union will only deepen as we are just over one year from the expiration of the current collective bargaining agreement.

What are the odds that baseball will get out of its own way to ratify a new CBA without a work stoppage if they can’t come to an agreement during a pandemic to resume play at a time when the country badly needs a distraction?

The owners could have embraced this moment, viewed the extra $20 million per team as an investment in the future health of the game, but greed drowns out every other impulse in billionaires.  If owners were circumspect and concerned about the more global aspect of the game, they would be thousandaires like most of their fans.

Fans don’t have a seat at the negotiating table, but they wield a substantial weapon that might eventually cost owners and players a hell of a lot more than $20 million per team.  We have pens that write checks to cover season ticket costs, and if those pens are unused, baseball may have a reckoning that reels franchise values and player contracts into closer alignment with the financial realities fans deal with.

Sure, going to Wrigley Field is fun.  I love the memories I’ve built over a lifetime as a Cubs fan, but until I believe Tom Ricketts is anything but an greedy opportunist, I’m out.  Every time I’ve been to Wrigley during the Ricketts era of ownership, the feeling of Tom’s hand in my pocket was unshakeable.  Around every corner was a contrivance designed to separate my money from my wallet.

It’s time for both owners and players to understand who really has the power in baseball, and to suffer a consequence for their indifference to our plight during these difficult times.  I’m opting out of all Cubs related purchases.

Now, I love Chicago and the Cubs, but maybe I can find a cheap alternative to Wrigley Field.  Maybe can head to the corner of Addison and Sheffield without dropping $75 on a ticket and $11.50 for a beer.  On the corner opposite the Wrigley Field marquee is a spacious bar called “The Cubby Bear.”  Games are on TV, concessions are much less expensive, and the fans are just as friendly as they are inside the park.  And neither Ricketts nor the players get a dime of what I spend.

For owners and players, that’s how you negotiate, and if enough fans do likewise, you’ll need to learn that.