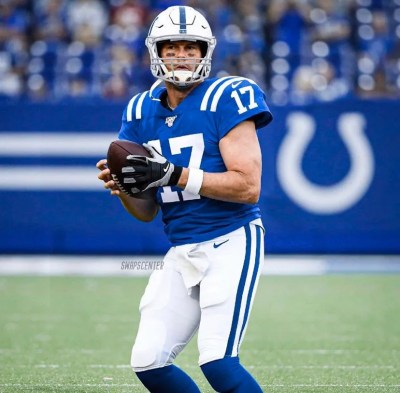 Philip Rivers needs to play as well as he ever has for 15 more Sundays and one Thursday, but that’s asking a lot.

Colts quarterback Philip Rivers needs to find a way to stop the clock, but God doesn’t allow us three timeouts and a two-minute warning.

He’ll turn 39 in December, and last year played like it.

Tom Brady and Drew Brees are outliers in their ability to perform well past the age of decline, and Rivers will try to join them in 2020.

Here’s what Rivers said this week about those who watched him last season as he led the Chargers to a 5-11 record, “Shoot, let’s turn on the tape and watch all the good things.’ Yes, there were some bad plays last year. There were certainly some throws I want back and certainly some very costly mistakes.

“I own up to all of those, but I just think there was so much good, and I still – shoot, I had some throws last year that were probably as good as I’ve had in my whole career,” Rivers proclaimed.

What Rivers doesn’t realize is that this is exactly the way age robs athletes of their magic.  It’s not a steady decline over time.  The erosion of ability happens in fits and spurts before it finally abandons ship forever.

One day, suddenly your body does not do what your brain asks it, but then everything is back to normal each day for the next two weeks.  Then there is another day of disconnection between mind and body.  A year later, those weird and unpleasant days of physical awkwardness happen once a week.  And then twice a week.  And then the weird days become normal and the magical days occasional.

Finally, we sit at the bar with friends telling stories about what we used to be able to do.

For Rivers to look at his great throws as a standard he will be able to reach consistently in 2020 without experiencing any of the difficulties that led to 20 interceptions in 2019 is going to be hard to manage.

A lot has been made of the Chargers poor offensive line play as an explanation for his those picks last year, but 12 of the 20 came from a clean pocket.

I’m not saying it’s impossible for Rivers to find his mojo with this change of environment behind a better o-line, just that it does not happen very often.

Aging is miserable.  Saying goodbye to athleticism we took for granted in our youth is a bitter and irrevocable experience.  It happens to all of us. Time is undefeated.  Peyton Manning and Johnny Unitas couldn’t beat it.  Michael Jordan and Ted Williams lost too.  Seemingly ageless warriors like George Blanda and Greg Maddux eventually faded.

Rivers hopes he can forestall that ordeal for another year or two.  He wants more than anything for one final season of slinging a football on time and on target.  Maybe he gets that, or maybe the sad and inevitable downturn continues and his days of mastery dwindle.

One argument in Rivers favor is that he never won games because he could run or throw with uncommon zip.  He has always won on guile and competitive fire.  Fortunately, guile and fire can burn well beyond athleticism.  Hell, Larry Bird still dreams he can win championships.  Then he wakes up and feels the aches in his 63-year-old carcass.

The Colts wagered $25-million Rivers has one more 16-week run of dexterity, and fans hope that the Rivers of 2020 can compete as the quarterback he was in 2007 and 2008 when he eliminated their team from the playoffs.

Whether the Colts climb back to the top of the AFC South is almost entirely dependent upon Rivers’ ability to wring one more year of high quality play out of his flawed body.  He doesn’t need to turn back the clock – it just needs to move forward very slowly.