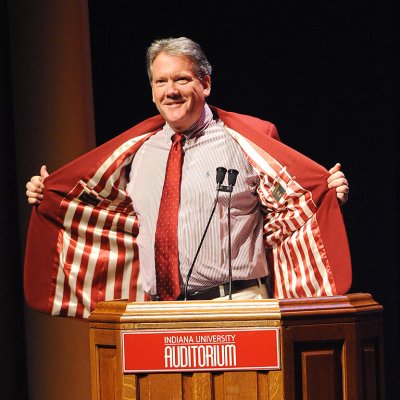 There has been a heaping helping of good and a small portion of not so good during the 11 1/12 years Indiana University Athletic Director Fred Glass has been on the job.

Glass has one day left until his resignation takes effect and Scott Dolson takes the role he has coveted through his tenure as Glass’s lieutenant.

The bar for excellence in the position has been set high by Glass, a leader who has been unwavering in making the welfare and success of the student-athletes his top priority.

Among the notable accomplishments during Glass’ tenure:

That’s a hell of a list of achievements, and it explains the Medal for Excellence that Glass received today as a significant pat on the back from IU President Michael McRobbie for his tireless work.

There are fans who wanted more from Indiana Football and Men’s Basketball during the Glass era, but arguing that IU should regularly go to the Big 10 Championship Game out of the East Division is insane.  Last fall, the Hoosiers finished the regular season with eight wins despite losing their starting quarterback early in the season.

As for IU Basketball, Glass inherited Tom Crean, who outgoing athletic director Rick Greenspan was inexplicably allowed to hire.  Glass is responsible for awarding Crean an extension in 2012 that included ludicrous level of buyout cash should a change have been made.  That deal served IU well for a year as the program won the Big 10, was ranked #1, and advanced to the Sweet 16 in 2013, but it became an albatross around the neck of the program as Crean wandered away from what caused the program’s resurgence is 2012-2013.

Since Crean was fired and replaced by Archie Miller, the growth has been slower than anyone wants, but it appears the corner is about to be turned with the 2020-2021 season.

In every public comment and private conversation I had with Glass, he passionately advocated for the best experience possible athletically and academically be provided to Indiana athletes.  That was clearly the priority that meant the most to him.  Every year, 850 student-athletes and their parents relied upon Glass to provide the tools for a safe and fruitful experience.  And at every opportunity he delivered.

Among his many accomplishments, I believe Glass will be proudest that he founded the Excellence Academy as a difference maker for IU athletes.  It provides all the support necessary to launch graduates into an adult world filled with unique challenges.

It’s rare that an executive leaves a highly visible position where he is credited with as many successes as Glass without racking up a nearly equal number of failures.  More often, the replacement is seen as a Godsend who makes a few easy corrections that establish some early popularity.

Dolson is going to have a tough time finding much Glass did that requires correction.  There are no fires to immediately extinguish, and the latest round of facility upgrades needed to test athletes have been completed.

As for Glass, he’ll take some time, find another challenge, and attack it.

One thought on “With one day remaining as IU AD, Fred Glass has checked all boxes”