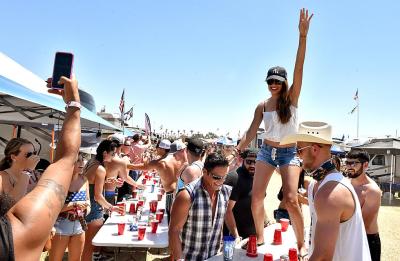 Can college students be trusted to avoid parties like this in order to save the 2020 Big 10 college football season? (This picture, by the way, is of a party at an Alabama college that was thrown to see who could get infected first – if that tells you anything about the responsibility that can be expected of some college students.)

The Ivy League has announced what many already assumed – fall sports are canceled.  That’s bad news for student-athletes and fans at those institutions, but what does it mean for college football elsewhere?

Two days prior to the shutdown of college basketball conference tournaments and the NBA, the Ivy League pulled the plug on its event, so they have a history of being a little bit ahead of the curve.

Remember, when we thought they were hysterics for calling off their tournament?  Then Utah Jazz center Rudy Gobert tested positive, and American sports hit a big fat pause button that for the most part has remained engaged for the almost four months since.

Despite the lack of a vaccine, fans hope college football will be played in front of fans in two months.  We know Ivy League folks are smarter than other people, and just a little less concerned about the economics of their athletic departments and businesses neighboring their campuses.  The bigwigs of the Big 10, however, are neither encumbered by the fear of reality geniuses are known for nor a disengagement from financial concerns, so maybe we can be right this time!  And we better be.

Not only does the Big 10 crave games and the cash that comes with them, conference ADs understand that the financial well-being of college towns like Bloomington, West Lafayette, Ann Arbor, East Lansing, Iowa City, and Champaign need those football weekends to sustain themselves.

Hotels that normal rent for $129 per night draw more than $300 with a three-night guarantee.  Strip those bounties as well as the huge nights at restaurants and bars throughout those areas, and nuts are left unmade.  Businesses fold.  Jobs are lost.

Football weekends are the life blood for these communities.  Without seven Saturdays with tens of thousands of well-heeled fans flocking there from all over their respective states, lives change for the much worse.

So the Big 10 is hoping for a miracle.

They want players to sequester themselves from the rest of the student body as best they can, practice excellent hygiene, and wear masks whenever practical.  Other place like Clemson seem to be negotiating with Covid-19 in a slightly different fashion.  It appears the Tigers have begun a campaign to build herd immunity prior to the season by having many players contract and recover from the virus.

The Big 10 has been less pragmatic but far more humane than Dabo Swinney’s squad.  Safety first for 18-23 year-old college students is a hell of an experiment.  I can only speak for my own experience at Indiana University, but I tenaciously avoided being sequestered from a specific demographic of the student body, failed to practice a responsible level of personal hygiene for virtually my entire tenure there, and wore a mask only on Halloween.

The chances of 14 teams of 100 football players enforcing the difficult-to-maintain level of discipline required to avoid Covid-19 are longer than Indiana’s odds of winning the National Championship.

There is a lot riding on the minute-by-minute decision making of 1,400 young men who will be the targets of an even greater number of young women on Big 10 campuses.  All it will take is one player to forget the rules for a brief time, and the whole shooting match will end the way the Ivy League closed theirs today.

It will cost those college towns and athletic departments millions of dollars.  Businesses, jobs, wealth, and a hell of a lot of fun will be lost, and perhaps worst of all, those high-minded pinheads running Ivy League institutions will be right – again.