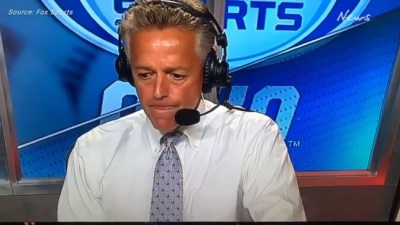 There is an old saying in broadcasting – “Treat every microphone like a live microphone!”

Managers remind hosts of that multiple times everyday, and anyone who gets paid to speak into a microphone repeats it often.  Cincinnati Reds play-by-play voice Thom Brennaman forgot that basic rule last night.

About some city, Brennaman said, “one of the f*g capitols of the world” as the broadcast returned from commercial prior to the seventh inning of game one of a doubleheader.  When the fifth inning of game two began, Brennaman attempted to apologize and left the studio.

Obviously, Brennaman did not know his mic was live, but that is no excuse.  Broadcasters are responsible for what comes out of their mouths at all times, and words that denigrate and offend groups should never be uttered anywhere, but especially near a microphone.

So Brennaman has been suspended by the Reds, who employ Brennaman to call games on Fox Sports Ohio.  Some words convey thoughts that cannot be excused, and “fag” is one of them.

There was some anger on social media last night about why Brennaman was allowed to continue broadcasting for five innings after his critical error.  I’ve been a part of this kind of drama as a manager, and it’s not as easy you the manager (or you) would like to unilaterally remove a talent from a show.  There is a process to handle moments like these that must be respected..

The producer calls the ops manager to notify him of the issue.  This might have taken a few minutes as the producer may not have known the comment aired live until someone who heard it posted on social media.  After the ops manager is told, he or she will notify the boss at the next level.  That boss will call lawyers and HR people.  Everyone meets – probably on a Zoom call – and a protocol is hammered out.  Action follows swiftly after that, but it takes a little time to get ducks in a row.

It’s likely the Reds and Fox waited to see if there was an uproar on social media that required an immediate suspension or dismissal.  They landed on a Brennaman apology followed by an indefinite suspension.

The live apology from Brennaman was inglorious on a number of levels.  Here it is in its entirety:

“I made a comment earlier tonight, that I guess went out over the air, that I am deeply ashamed of. If I have hurt anyone out there, I can’t tell you how much I say from the bottom of my heart that I am very, very sorry.”

“I can’t begin to tell you how deeply sorry I am. That is not who I am and it never has been. I’d like to think maybe I could have some people that can back that up. I am very, very sorry, and I beg for your forgiveness.”

The first paragraph is fine, and that is where is should have ended.  From there, Brennaman indulged in defensive language that defies credulity and common sense.

At the top of the second paragraph, Brennaman refers to himself as a man of faith.  This is where all pious fools wander when they get caught exhibiting non-faithful behavior.  It insults those who are truly people of faith.  He then interrupts his apology to call a home run by Nick Castellanos (a strange choice), before blathering about whether he will put on the headset again, as though the consequence for his stupidity and offensiveness is the most important part of this drama for the audience.

In Brennaman’s conclusion, he really goes off the rails by claiming his choice to use a truly offensive word does not define him.  Sadly for Brennaman, human beings are exactly the sum of their thoughts, words, and actions.  With wrongheaded audacity, Brennaman then calls for people he knows  to “back that up.”  Using a public apology to rally troops to his defense shows where his heart truly is – in survival mode.

The better play would have been to end the apology with the first paragraph.  A written and more complete statement focused only on contrition could have followed.  Following that, a very quiet meeting with Brennaman and LGBTQ leaders is convened.  Maybe a donation is made to PFLAG Cincinnati and Brennaman volunteers at their events.  At some point during the offseason, Brennaman tells the story of his awakening.

The point is not for Brennaman to defend who he is – or have friends and family do that.  It’s for the people he offended to forgive him, and that can only be done through displaying growth away from the dark-hearted behavior he exhibited.