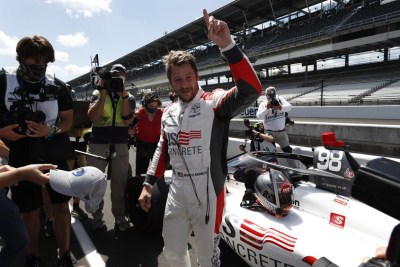 Shortly after the completion of the 103rd Indianapolis 500 last year, while Simon Pagenaud was celebrating the greatest moment of his racing life, Marco Andretti was sitting on his golf cart on pit lane, head down, frustrated and looking like he wanted to be anywhere but where he was. He had just finished multiple laps down, perplexed at battling an ill-handling car for three hours. His race was virtually over shortly after the green flag dropped.

As I walked towards Marco Andretti to garner some post-race comments for a column the IMS News Bureau would file for his home Lehigh Valley-area newspaper, The Morning Call, Marco saw me approaching. He put his hands out with shoulders shrugged and asked, “What do you want me to say?” I replied very simply, “You battled the car all day. What happened?” Andretti replied very simply, “I don’t know; we need to look at it. But I picked a terrible day to have the worst race of my career.”

A man of few words sometimes, that was sufficient for me in the moment. And Marco Andretti always understands the moment at Indianapolis Motor Speedway. He takes nothing for granted. He understood the moment when he amazingly got beat at the line his rookie year in 2006 by Sam Hornish Jr. Those chances don’t come around often. But what a moment it was for him last Sunday as he put an Andretti on the Indy 500 pole for the first time since 1987.

I’ve enjoyed working with Marco over the years. Among some IndyCar fans, he may be one of the most misunderstood drivers out there simply because he’s so reserved. But he’s very focused and VERY well respected among his fellow drivers; a favorite. The scene in the Team Penske garage of Josef Newgarden, Will Power and others celebrating as they watched Marco capture the pole was awesome. The admiration and happiness of the moment permeated throughout the Speedway…

James Hinchcliffe: “People who don’t know him well don’t realize how hard he works, how much he cares, and how much he shares with other people. It’s incredible, and that’s why we’re all happy for him.”

Conor Daly: “It really is cool. Marco works so hard and cares so much, and he’s such a nice guy. I can’t tell you all the things he’s done for me in my career and the friend he’s been.”

There’s no doubt the Andretti name at Indianapolis has a prestige and fan following that would make Marco one of the most popular winners in recent memory. Indianapolis Motor Speedway president Doug Boles’ video Tweet of fans cheering across the street in a 16th Street lot as they watched on the video board inside the hallowed grounds as Andretti secured the pole was a reminder that Marco has a lot of people pulling for him. The Andretti name means so much to the passionate Indy 500 fans. It was one of the neatest moments in this odd spectator-less world. It’s a shame the fans weren’t inside to share in the moment because there’s no doubt the roar would have been loud.

“It would have been awesome,” Andretti said afterwards of the thought of fans being in the stands. “But I can’t complain. I’m lucky to be driving race cars during these times.” Marco Andretti always understands the moment.

Marco certainly has a firm grasp on the significance of his family’s history at Indianapolis and how fortunate the Andretti family has been to be able to compete in 80+ 500s, not to mention the wins the Andretti Autosport team has had.

In a pre-500 column for The Morning Call a couple years ago, Andretti said, “People sometimes bring up the idea of an Andretti curse at Indianapolis. I think it’s a cool media story. Do I believe in it? No, I don’t. I think we’re actually pretty blessed as a family when you think of coming up on 80 tries here as a family, and we’re all unscathed and able to keep doing it. And I have a lot of good history here, actually. If I’m able to win, the crowd’s going to go nuts.”

Maybe this is Marco Andretti’s year, his time to shine. If that elusive Indy 500 win comes to fruition, it would once again be a shame to not have the passionate fans there sharing in the moment. But if Marco Andretti is “able to win,” I have a feeling a cast of millions will “go nuts,” in some form or fashion and share in the moment.