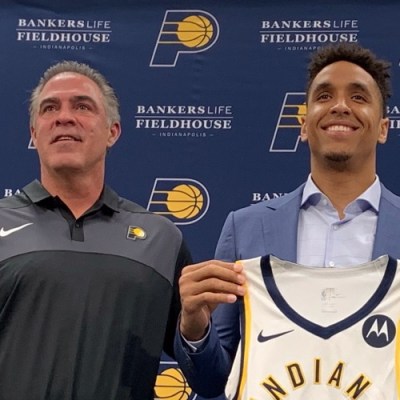 There were several events like the introduction of Malcolm Brogdon last offseason, but they will likely be few and far between this fall.

The Indiana Pacers were routed by the Miami Heat in their four games of postseason futility.  A sweep is what their level of effort deserved, so yesterday’s 99-87 loss was delivered as expected.

There are several pieces of good news, and some good news/bad news issues depending upon your perspective for the Pacers as the front office looks ahead to the 2020-2021 season (assuming the season begins in 2020).

Let’s deal with the positives first – the plantar fasciitis that took Domas Sabonis out of the Bubble before play began and the knee injury suffered by Jeremy Lamb will heal.  That will help solve two glaring issues – rebounding and bench scoring.  Victor Oladipo’s rehab continuing through another offseason will bring him closer to 100% – we hope.

Depending upon your perspective, there are issues that you will either find encouraging or frustrating:

Oladipo is heading into the final year of his contract, so if he wants to leave after next season as a free agent, the Pacers will have a tough time getting value back in a trade.  In the four miserable-to-watch playoff games, Oladipo was unable to get the corner on even Goran Dragic, and was unable to stay in front of almost anyone he was paired against on the opposite end.

That’s not to slam Oladipo, but to point out what opposing GMs will see as they evaluate him as a potential one-year rental.

More good or bad news – the Pacers have everyone under contract for next season but Justin Holiday and JaKarr Sampson.  That means roster stability, which would be great if not for the washout in the playoffs.  It also constrains management opportunities to sign free agent talent because the Pacers have no cash to spend on upgrades.

Here’s another bit of grist for your mill – Nate McMillan, not beloved by fans after leading the Pacers to being swept three times in his four playoff series, signed an extension prior to Bubble play.  That means that replacing him is impossible because Kevin Pritchard will not pick up the phone to tell owner Herb Simon he is going to have to write a check to cover that extension two weeks after it was announced.

But for those of you who want McMillan gone, let’s look at his record a little more closely.  He can’t be held accountable for the sweep against the Celtics last year, as the team cratered following Oladipo’s injury.  The Pacers arguably played the Cavs tougher than anyone in the Eastern Conference when they were swept in 2016.  Losing Sabonis, the lone Pacers all-star, before the debacle against the Heat gives McMillan another valid out for 2020.

More bad news – the Pacers have no first round draft pick.  It was sent to Milwaukee in return for Malcolm Brogdon.  That’s not too bitter a pill because the pick earned by the Pacers is 24th.  The last three first round picks brought the Pacers T.J. Leaf, Aaron Holiday, and Goga Bitadze, so if past is prologue, whomever they would have taken likely would not have brought a unique talent to the team.

The only path available for acquiring new talent is through trade, and that means giving something to get something.  Barring an odd one-sided deal like Pritchard executed last year to buy T.J. Warren’s contract, the piece that may generate significant interest is Myles Turner, who at age 24 still has upside that is difficult to estimate.  His record in playoff games, though not specifically his to own, is 6-20.

Last offseason was critical for the Pacers because they had the assets available to flip a significant chunk of the roster.  This year, there are very limited avenues for upgrading talent beyond what can be done internally.  That may make this the offseason that defines Pritchard’s era as the team’s architect.

The Pacers are now one of five franchises in NBA history to have been eliminated in the first round in five straight seasons.  No one wants to see that streak reach six.