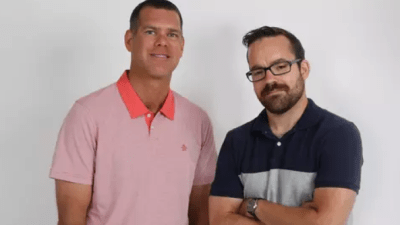 This is my favorite picture of Query & Schultz, who overcome their obvious disdain for one another to find respect and friendship.

And they always said their faces were made for radio!

Query & Schultz, who enlightened and charmed sportstalk radio listeners for nearly a decade on WNDE-AM in Indianapolis, will make their TV debut tomorrow from 6p-7p on ISC Sports Network (Xfinity channel 81 in Indy) and the ISC app.

Fans of the show are hoping for the same quirky combination of Indy sports insight and contentious banter between the two co-hosts, who found a way past multiple and obvious differences to form a genuine friendship.

The radio show began without the two hosts meeting.  In fact, Query believed Schultz would be board-operator and not co-host until airtime on their first day.  It may not have been until Schultz opened his mic for the first time that Query realized Schultz’s true role.

Query loves to offramp from a planned topic to explore a story that is quite different (and occasionally unrelated) that piques his interest, while Schultz is a very linear and literal thinker who does not enjoy meandering across the prairie of ideas on his way to a point.  That basic behavioral difference made Query & Schultz a unique and effective pairing.

Regardless of when Query & Schultz discovered what they were doing together on the radio, the audience responded to their unusual chemistry and unique thoughts about sports and culture.

Sadly, the radio show came to an end when WNDE’s parent company made massive cuts across dozens of their stations without regard to hosts or listeners who crave a local connection.  As quickly as Query & Schultz came, they were off the radio.

The return of Query & Schultz is great news for those sports fans in search of a variety of voices in traditional media.  Let’s hope for more hours from this very tolerant duo, who found a way past their many differences into mutual respect and then a friendship that outlasted their radio show.

As we witness dissent devolve into misery in our streets as well as media, it’s sweet and affirming to listen to – and watch – two desperate souls crash into each other while remaining good friends.

I’m sure it will be like riding a bike for Query & Schultz – and their listeners – who have gone 200 days without one another.

Get ready for sports, off ramps, tolerance, and insight tomorrow at 6p on ISC.