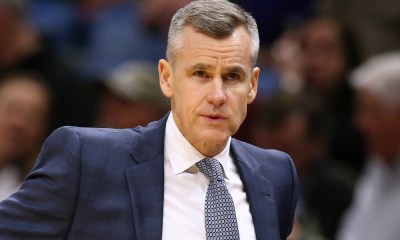 Earlier today, a comment suggested Billy Donovan is a lateral move from Nate McMillan. I disagreed. As it turns out, he was correct.

Reflexively, I immediately thought Billy Donovan as the next coach for the Indiana Pacers would be an upgrade over Nate McMillan.  Oops.

Upon further review, that might not be the case.

McMillan was fired because he could not lead the Pacers to postseason success.  Here’s what Donovan has done in the playoffs over the past four seasons:  he has led his Oklahoma City Thunder to exactly the same number of series wins as McMillan provided the Pacers – zero.

While McMillan trails Donovan in total playoff game wins 7-3, he has not had a healthy roster and bonafide star in any of his first round flameouts.  Donovan led teams with a completely healthy Paul George, Chris Paul, and Russell Westbrook, although those three never played simultaneously.

It should be mentioned that in Donovan’s first season, the Thunder advanced to the Western Conference Finals with Kevin Durant, Westbrook, and Serge Ibaka.  They took a 3-1 lead over the Golden State Warriors before folding.  The Warriors then did the same thing against the eventual NBA champion Cleveland Cavaliers.  Durant left after that season for the Warriors.

In the regular season, Donovan’s record over the last four seasons is a respectable 188-130.  McMillan’s is an eerily similar 183-136.

It’s not as though Donovan and McMillan are coaching replicants, but they are alike enough to make a reasonable person question whether a change from McMillan to Donovan is worth the trouble of firing a good guy to replace him with another good guy.  Just as the Pacers knew what they would get if McMillan returned, they can project a reasonable facsimile of the same results with Donovan.

While this coaching search is drawing a lot of attention from Pacers fans, let’s be honest about what wins championships.

It’s not the coach.

The last 24 NBA Champions (minus the 2004 Detroit Pistons) have had at least one of these nine stars on its roster – Kawhi Leonard, LeBron James, Steph Curry, Tim Duncan, Shaquille O’Neal, Dirk Nowitzki, Kobe Bryant, Kevin Garnett, and Michael Jordan.

If we take our championship list another 16 years back to 1980, we add first ballot hall of famers Magic Johnson, Larry Bird, Julius Erving, Isiah Thomas, and Hakeem Olajuwon to our list of players indispensable to winning.  So on 39 of the last 40 champions, at least one of only 14 players were on each roster.

If the Pacers want to play in the big boy pool with a chance at a title, they need to find a way to build a roster around a hall of famer (or two) in his prime.  Whether the next coach is Billy Donovan, Darvin Ham, Dan Craig, Mike Budenholzer, Becky Hammon, or someone else, they need to provide him or her with a great player to join the current roster filled with good players.