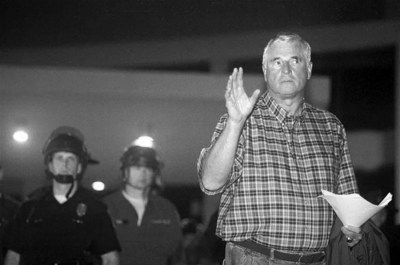 It’s been 20 years to the minute that Vince Welch broke the story that Bob Knight was out as Indiana’s basketball coach.

My phone rang on a Sunday morning exactly 20 years ago today.  It was WIBC sports director Vince Welch.  “Bob Knight is being fired this morning,” he told me.

This was when I was the assistant program director of the radio station, and Knight had endured a tough year.  The story of his choking Neil Reed led to a zero tolerance edict from Indiana University president Myles Brand, and days prior to that Sunday, a student named Kent Harvey angered Knight by referring to him by his last name only.  Reports he grabbed Harvey by the arm as he chastised the freshman called into question – again – Knight’s ability to control his temper and may have violated his zero tolerance agreement.

I knew not to ask Vince for his source, but wanted to know how certain he was.  Vince said he had the story cold, so he called into WIBC’s First Day program to report Knight’s termination.

These were the days before Twitter and other social media, so huge stories still broke via traditional media.  Trusted sources were necessary, and being right was the most important thing a journalist could be.  There were no Woj Bombs in 2000.  This was a Vince Bomb, and it needed to be right more than first, but first was still a good thing for WIBC.  When he reported the story all I was certain of was that Vince was first.

Even when a manager absolutely trusts a reporter – as I did (and do) with Vince – there is a loneliness while others avoid the story.  My unease became full blown nausea shortly after a respected media voice disputed the veracity of Vince’s report that the most famous, loved, and hated person in Indiana had been dismissed.

WTHR-13’s Don Hein told viewers emphatically that the reports was false.  He said he had spoken to his sources at IU who said Knight was NOT being fired.  My heart sank.  If we had screwed this up, the stink would last for a long time, so I called Vince to tell him what Hein had said.

Vince again, with a hint of frustration this time, reiterated his firm belief that he had the story right.

Later, Indiana University confirmed what we already knew, that Knight was out.  Over the next few hours and days, Bloomington erupted.  Players threatened to walk out en masse.  Thousands of students protested outside Assembly Hall.  Knight gave a tearful farewell address at Dunn Meadow.  And to quell concerns of the players, Mike Davis was hired as the interim head coach.

Journalism, coaching, and IU Basketball have all evolved over these past 20 years.  Breaking news on the radio is unheard of because of the ease and speed of posting on social media.  Coaches like Knight are no longer tolerated because it’s better to lose while behaving than win while embarrassing a university.  And Indiana Basketball has meandered through a lot of mediocrity interrupted by three outstanding seasons as it continues to search for the identity it willfully torched when Brand punted Knight.