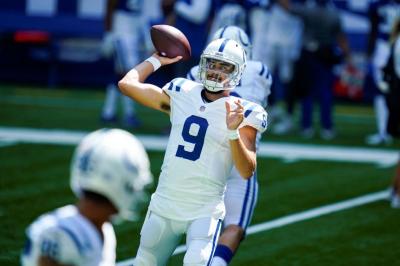 Maybe Jacob Eason will be the next great Colts QB, but it will be awhile before we find out.

With 11 games left in the Colts season, smart guys know what is going to happen, and it sucks.

The quarterback position is the fatal flaw that will keep the Colts from being a Super Bowl contender.  They could eke their way into the postseason, but their stay will be short.  That’s because Philip Rivers is who he always has been – a game manager that throws it to the other guys enough to get you beat.

That’s who he was against the Jaguars in the season opening loss and again in Cleveland last Sunday.  He was also that guy with the Chargers last year, leading them to an 0-6 record when he threw two-or-more interceptions.

The thing with Rivers has always been that he is usually unflappable and laser accurate, so the picks appear to be a correctable issue.  He’s also one of the better game managers in the NFL with a per pass attempt average of eight yards.  But Rivers is almost 39-years-old, and if the riddle of the Rivers could be solved – it would have been.

Rivers is the NFL’s version of Tim Wakefield – the Red Sox knuckleballer.  His throws are soft and once in a while yield home runs for the opposition.  He is also a likable guy who answers questions easily and completely.  Writing or saying negative things about him isn’t fun, but it is necessary to be honest about what his impact on the Colts is.

He is not the answer for the Colts.  He wasn’t the answer in San Diego or Los Angeles either – at least not if the question is “Who can take us to the Super Bowl?”

His coaches and general managers have always believed Rivers had the ability – if only he could avoid the strange lapses leading to interceptions, and they have always laid the blame elsewhere.

Colts management suggested several times that Rivers’ picks in 2019 were because of the porous Chargers offensive line.  After Sunday, fans and media shifted responsibility to Le’Raven Clark, who filled in for injured starting left tackle Anthony Castonzo.  It’s true that Clark was a slow-moving chicane for Browns game-wrecker Myles Garrett, but Rivers threw the picks.

Others are talking about the spate of injuries to weapons Rivers was expected to utilize with the Colts.  Again, it’s true.  Marlon Mack tore his Achilles, Parris Campbell has a PCL issue, and Michael Pittman had surgery to address Compartment Syndrome.  All are on the shelf and will remain there for at least a few more weeks (Mack is done for the season), but injuries happen to virtually every team.

The excuses are accurate, but not germane.  Rivers is Rivers.  Brissett is Brissett.  Eason?  Well, we don’t know what the hell he is, but you can bet your ass everyone within the Colts family is happy they were able to sidestep the enthusiasm for Eason that would have been the result of a full preseason.  The kid might not ever be a starting quarterback in the NFL, but he sure looks and throws like one.  He’s just the kind of guy who would light up the fourth stringers about the be cut in the second half of exhibitions.

Right now, the Colts are trying to silence the early adapters to Rivers being a false idol in Indianapolis.  To help, the NFL’s scheduling office gave them what should be a two-week reprieve.

Rivers and the Colts get to spar against bottom feeding Bengals and Lions the next two Sundays.  The pressure will be reduced on the Colts and Rivers as they ascend to 5-2.  Fans will forget all about the two interceptions and safety against the Browns, and the two picks against the Jaguars.

Then Rivers will be forced to flow upstream for four weeks against the Ravens, Titans, Packers, and Titans (again).  That will be the season, and the search for the next great Colts quarterback will continue.