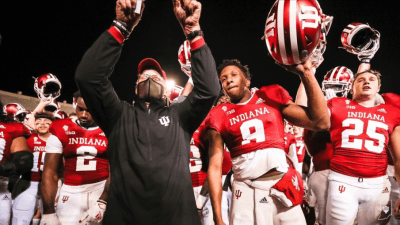 Tom Allen and Michael Penix celebrate the program’s first win over a top 10 opponent in 43 tries!

Since 1987, the Hoosiers played 42 top 10 teams, and lost to all of them. If eighth ranked Penn State played Indiana 43 times, the Nittany Lions would likely win 42.  But that 43rd game came last night in Bloomington.

The Hoosiers were outgained 488 yards to 211, but yards don’t always equate to points.  Penn State also controlled the clock, winning the time of possession battle by better than a two-to-one margin – 40:25 to 19:35, but time of possession isn’t how winners are determined.

Penn State turned the ball over three times and committed 10 penalties, accounting for 100 free yards for Indiana.  They were undisciplined and foolish, and on a crisp autumn afternoon in southern Indiana, that was enough.  Oh, and Indiana has a head coach with a set of man-sized onions helped push the Hoosiers across the finish line.

People who cover Penn State are moaning about the mistakes that cost the Nittany Lions the game – including the brain dead moment when they scored a touchdown with 1:42 left, rather than collapse on the one and kill the clock.  I would rather write about Tom Allen’s onions.

The onions came into play during the overtime, which was improbably forced by an Indiana offense that until the last 1:42 was inert, led by a quarterback whose deliveries were as inaccurate as Newman the mailman’s on Seinfeld.

All of a sudden, passes from Michael Penix that earlier sailed out of bounds or sliced through receivers’ hands found their mark and IU scored a touchdown and converted a two-point conversion to make the OT necessary.

Allen showed his substantial onions after his Hoosiers scored a touchdown that answered Penn State’s during the first overtime possession.  Instead of kicking the extra point to tie the game and send it to a second overtime, he went for two.  Penix rolled left, tucked the ball, and dove for the end zone.  The ball was extended toward the pylon, and appeared to touch it before it hit the sideline.

The ruling on the field gave Indiana the two points.  A replay review ensued, and the call stood without being confirmed.  Indiana was a winner because Allen understood his defense was gassed, and when there is an opportunity to finish off a superior opponent rather than allow him another chance to assert himself, you take it.

Yardage is important, and so is time of possession, but it’s points on the scoreboard that matter, and Indiana ended the night with 36 to Penn State’s 35.  That’s all that matters.

Indiana University’s football team won the kind of game they had lost previous 42 times dating back to a time before the Earth cooled, and it was won by a coach with the guts to put the game in his offense’s hands for one play – winner take all  Allen decided the chances of getting three yards on that final play gave IU its best chance.

Allen was almost wrong, but the great thing about being almost wrong is that it’s just a different way to be right.