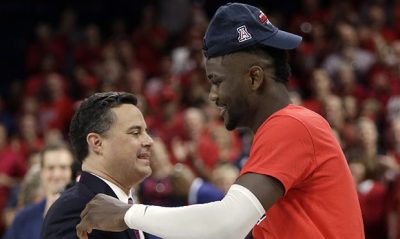 Sean Miller and Dandre Ayton are laughing all the way to the bank as the NCAA and IARP take years to hold Arizona accountable for accused cheating.

Arizona Basketball is in trouble – kind of.  At least it should be.

The university received a Notice of Allegations listing nine violations, with five of them falling into the Level One category.  That’s reserved for the most serious – those that should derail the careers of coaches and administrators.

Arizona has asked that the case be referred to the Independent Accountability Resolution Process that was established by the Commission on College Basketball, chaired by former U.S. Secretary of State Condoleezza Rice.  Remember them?  They were supposed to finally put an end to the rampant cheating in college basketball.

Rather than explain exactly what the IARP is and how it works, let’s just say it is a layer of bureaucracy that allows schools like LSU, Kansas, Memphis, and now Arizona to kick the can down the road another couple of blocks as they continue to cheat in order to gain an on-court advantage before they face their day in court.

To this point, the IARP has accomplished exactly nothing.  Of the cases referred to it, none have been resolved, which is ironic because the word “resolution” is right there as the “R” in IARP.

Arizona stands accused of paying basketball players Deandre Ayton and Rawle Alkins while they were student-athletes at the school.  There are wiretapped conversations between then Arizona assistant coach Book Richardson and street agent Christian Dawkins where it is mentioned that head coach Sean Miller was playing Ayton $10,000 per month.

That’s a pretty strong smoking gun that was revealed in court a year and a half ago.  The conversation itself took place more than three years ago.  God only knows how long the IARP will take to hold hearings, issue a finding, and bring a consequence to bear upon what appears to have been a rogue operation.

We don’t know how long it will take because the IARP has not completed its work in any of the cases referred to it.  In fact, the Arizona case has not been referred to it yet.  Arizona has only asked that the NCAA refer the case to the IARP.  How long it might take for the NCAA to grant or deny that request is unknown as well.

In the meantime, according to people within college basketball, the beat goes on.  Rice’s committee was supposed to clean up college basketball, but as anyone with a brain surmised at the time, its work has achieved the opposite result.  When a group of do-gooder bureaucrats is convened, the smart money is always on the outcome the committee is designed to stop.  That’s because do-gooders have no idea how to think like bad actors.

And so corruption in college hoops has accelerated.  The crooks and coaches have been emboldened by the glacial process the NCAA and its IARP have enacted.

Crooks are always more efficient than the judicial process because those who mete out justice are paid regardless of the outcome, while swindlers cash in based upon speed and agility in avoiding or delaying culpability.

Arizona’s comeuppance might come, but it’s going to be far enough removed from its crimes that it will serve as a rationale for cheating rather than a deterrent.

If you would like your head to explode, please click on this link to learn more about the inanity of the IARP, and why its formation stole any potential for ending corruption in college basketball.