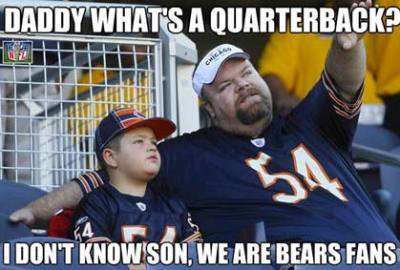 Bears fans shouldn’t blame Nick Foles or Mitch Trubisky for their misery. The miserable are responsible for their own misery.

Being a Bears fan was tough back in the day.  Every year, it was the same old thing – I would talk about Bobby Douglass, Wally Chambers, and Cecil Turner, and Dad would shake his head like I was a dopey little kid.

He was right.  I was a dopey, pie-eyed loon who bought into the hype every year.  I walked over to Lake Forest College to watch them work during training camp, hoping this would be the group that got things right.  It took a few years, but the Bears finally made the playoffs in 1977.  I was bouncing off the walls telling Dad how this will finally be the year.  Of course, when the Bears were destroyed 37-7 by the Cowboys in the first round, there was Dad shaking his head again.

Another trip to the playoffs came and quickly went in 1979.  Walter Payton was in the midst of his prime, but there were few quality players around him, so Dad’s head shaking continued uninterrupted until 1984.  That’s when things changed for the Bears.

Abandoned by general manager Jim Finks in 1982, the old man took over.  George Halas, the guy who owned the team and formed the NFL over 60 years before, orchestrated one of the great drafts in NFL history, selecting six rookies who quickly became starters.  And he hired Mike Ditka to wrangle his roster.  Then he died at age 88, but Halas’s last gasp brought one more brief glimpse of greatness.

Then things took a turn.  General manager Jerry Vainisi was fired, Payton got old, Mike Ditka embraced celebrity over football, diminutive QB Doug Flutie was signed, and the Bears became a stale shell of their former great selves.  Dad started nodding again, and two months after Ditka was fired in 1993, I moved to Indianapolis with my wife and son.

For two seasons, I was a free agent fan with no rooting interest.  The Bears had moved on from an effort to be great, and the Colts were the most irrelevant team in the NFL.  And then, out of the blue, 1995 happened.

A weird group of spare parts were cobbled together by former Bears GM Bill Tobin – the guy who tried to replace Vainisi – and somehow, someway, the Colts eked their way into a wildcard berth with a 9-7 record.  Two of their wins were outrageous comebacks from 21 points down, and Indianapolis all of a sudden figured out that basketball wasn’t the only sport in the world.

The playoffs were as magical as the regular season.  With Marshall Faulk nursing turf toe, the Colts still found a way to beat both San Diego and Kansas City to earn a spot in the AFC Championship Game against the Pittsburgh Steelers.  Thousands of fans showed up at the airport to welcome the Colts home from Kansas City.  This was before 9/11 when people could roam through the terminals as they pleased.

I took my son to the airport too.  Why not?  We were right there in the middle of the delirious throng as the Colts walked from the gate to the parking lot.  Sensing a need to beat the traffic – something I inherited from my nodding father – I slung Ryan on my shoulders and walked with the team, high-fiving fans on either side of us.

The Colts lost a classic against the Steelers the following Sunday, which was ultimately a good thing because I made the trip to Pittsburgh and sat among Steelers fans while wearing a Colts jersey.  Everything was cool between the Pittsburghers and me until Floyd Turner caught a Jim Harbaugh pass to give the Colts a 16-13 lead in the fourth quarter.

There were shirtless guys in front of me (it was 48-degrees) who turned to stare at me after Turner’s TD.  It seemed like they were sizing me up.  I had an odd feeling that if the Steelers lost, I would be the stooge who paid for the Steelers fans’ disappointment.

Fortunately, the Hail Mary that would have sent the Colts to the Super Bowl rolled off Aaron Bailey’s stomach and I was spared.  But not before glass bottles shattered against fencing just over my head and on the cement ramp to the parking lot at my feet.  I thought it was odd that all those bottles were breaking very near me, until it dawned on me that Steelers fans were targeting my jersey.

That weird and beautiful Colts season eradicated the final vestiges of my Bears fandom, and replaced it with a more convenient love of the local team.  That group of Colts would be destroyed by Tobin’s decision to whack virtually the entire offensive line, and replace coach Ted Marchibroda with Lindy Infante.

All was not lost as Tobin’s antics led to his dismissal.  Bill Polian was hired as his replacement, Peyton Manning was drafted #1 overall in 1998, and the Colts were set on a course to become absurdly successful until the end of Manning’s reign after 2010.

Watching the Bears get manhandled by the Rams last night reminded me of the futility of being a Bears fan.  The team has never really recovered from Halas’s death in 1983.  His grandsons have mismanaged countless iterations of the roster, and the team has been more or less irrelevant since Ditka was replaced.  Yes, there have been trips to the playoffs and even a Super Bowl appearance (against the Colts), but the days of expecting success at Soldier Field are long gone.

The McCaskeys keep hiring and firing GMs and coaches, but nothing ever changes.  That’s because the ownership never changes.  So the Bears are doomed to mediocrity, and a fanbase I am no longer a part of languishes.

For many reasons, I feel bad for those in my old hometown.  Chicago is cratering financially, withering culturally, and suffering as it watches the football team that it still dearly loves.  I often wonder what keeps Chicagoans tethered to a city and football team that relentlessly punishes them, then I take a deep breath and look out the window at a town and team I am proud to call mine.

That’s all the answer I need.