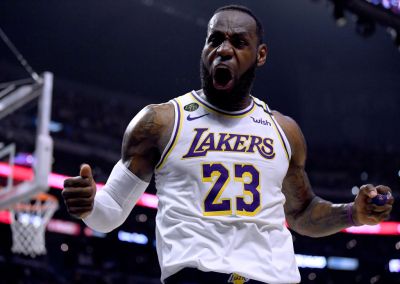 If LeBron James would rather lounge around Kate Hepburn’s old digs. who are we to argue?

If the Lakers don’t want to play for the first month of the NBA season, I’m good with that.  I don’t like the Lakers.

Take a bunch of L’s and then play catch up.  Cool by me.

The NBA is targeting December 22 as opening night, and Lakers guard Danny Green told The Ringer podcast Monday,  “If we start in December, I think most guys like, ‘I’m not going to be there.’ … I wouldn’t expect to see (LeBron) there. I wouldn’t expect to see him probably for the first month of the season. He’ll probably be working out with us … but I just don’t expect guys to want to be there, or show up willingly.”

Good.  Great.  See you in February!

The Lakers finished winning their championship in the Bubble on October 11, and normally players get a solid three or four months off after the end of the NBA Finals to recuperate.  But these are not normal times, and given TV audience levels during the playoffs, it would be beneficial for the NBA’s premier franchise to be front and center with its best player every night.

That’s how the NBA will look at it.  They hope the Lakers show up.  For me, please stay home.  LeBron can sit at the breakfast bar in Katherine Hepburn’s old house, play a little tennis on her lighted court, and enjoy life.  That’s fine.  Love it.  When you spend $38,600,000 on a house, eat and play there once in a while.

I would love to see the Miami Heat act likewise.  They played until October 11 too.

The clearer the path for the Pacers, the better, so I hope Jimmy Butler has scones in the library at Jackie Gleason’s old home in South Beach, although I have no idea whether Butler lives in The Great One’s former domicile or not.

In fact, I would like to see the top 37 NBA players, ranked by analytics, sit out the entire season! The Pacers would win their first NBA Championship in a walk.  They don’t have a single player in the top 37, but four Pacers fall immediately outside it.

The Pacers wrapped their season on August 24, so they are going to have almost four months between games even if the goal date of December 22 is met.  They will be eager to ball whenever the commissioner Adam Silver says “Jump!”  If that gives them an advantage – good!

Let the Lakers enjoy the SoCal warmth until President’s Day while the Pacers stack wins.